Should I use minoxidil foam? 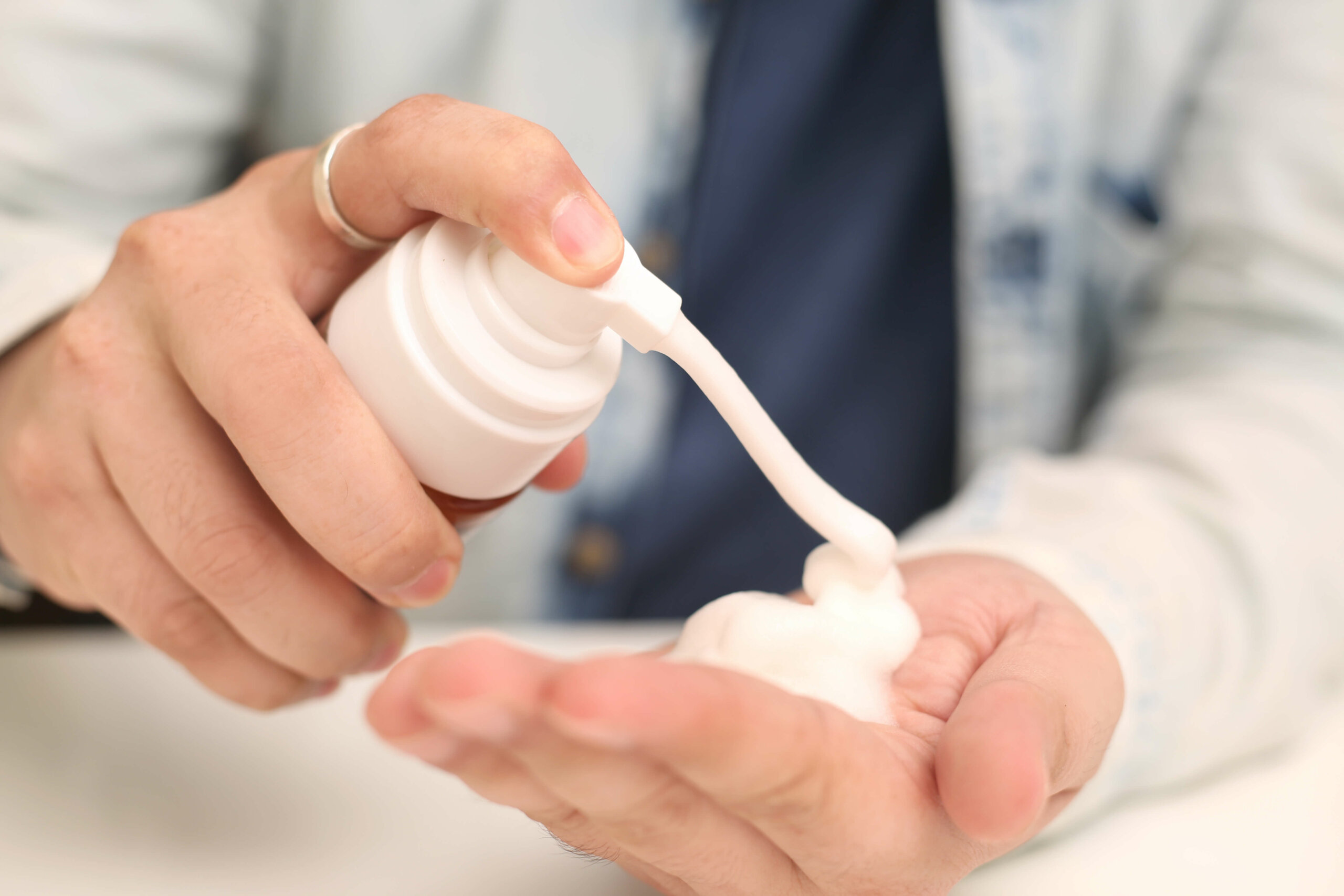 Minoxidil foam dries more rapidly and is sometimes considered to be easier to apply than liquid minoxidil.

Minoxidil has been sold as a hair loss treatment for androgenic alopecia (pattern baldness) since the late 1980s. However, minoxidil foam is a much more recent product. This hair loss treatment, which is exclusively sold in a 5 percent concentration, was approved for men in 2006.

Since then, minoxidil foam has been shown to be just as effective as liquid minoxidil. In fact, even though it’s meant to be applied to the crown of the head, studies have found that it can improve hair growth at the crown, temples, and hairline.

If you’re experiencing hair loss symptoms, you may seriously want to consider using minoxidil. It’s affordable, easy to use, and has few serious side effects. The 5 percent solution is thought to be most effective for men.

Who should use minoxidil 5% foam?

Minoxidil is meant to be used by people experiencing mild to moderate symptoms of pattern hair loss. If you’ve been diagnosed with androgenic alopecia and are experiencing issues like hair shedding, a receding hairline, or thinning hair at the temples or crown of your head, minoxidil foam can help.

Minoxidil is also used off-label to help people with other types of hair loss. According to a review in the Journal of Dermatological Treatment, this includes:

Minoxidil is sometimes also used before and after hair transplants. This helps improve the results of the surgery and prevents post-surgery side effects, like excessive hair shedding.

How does Rogaine foam work?

Minoxidil foam, also known as Rogaine foam, works as a vasodilator. It increases blood flow to your scalp and hair follicles. According to the review in the Journal of Dermatological Treatment, it’s also thought to influence the hair growth cycle, reduce inflammation, and may even have hormone blocking properties.

The drug minoxidil was first developed in the 1960s as an oral blood pressure reducer. When this drug, known as Loniten, started to be used, researchers discovered it was able to stimulate hair regrowth and improve hair health.

By the late 1980s, minoxidil had been approved as a topical hair loss treatment for androgenetic alopecia. This condition, commonly referred to as pattern hair loss, is caused by both your genes and hormones.

Other concentrations of minoxidil have been tested, but seem to mainly increase the risk of side effects. 5 percent minoxidil is currently thought to be the most effective product available.

Rogaine and minoxidil are essentially the same thing. Rogaine was just the original brand name for this medication. And this doesn’t mean that Rogaine foam is any different to generic minoxidil foam. In fact, quite the opposite: generic minoxidil foams and Rogaine foams contain the same active ingredient and should be equally effective. The most likely difference you’ll likely see is related to price, since generic products are almost always cheaper.

According to a study in the Natural Products and Bioprospecting journal, 5 percent minoxidil foam was approved in 2006. At this time, though, the solution was still under the Rogaine brand name due to their patent protection. This is why a lot of people may be more familiar with this product as ‘Rogaine foam for men’, rather than minoxidil foam.

When used properly, using Rogaine foam results in increased hair count and hair density. It also prompts thicker, stronger hair growth and improves scalp coverage. But of course, it’s not effective for everyone.

A study in Acta Dermatovenerologica reported that 75 percent of their study’s participants had improved hair growth after 24 weeks of using minoxidil foam. However, 91.6 percent were happy with the medication itself and the application process required. And 100 percent of participants were side-effect free.

There are no major differences between ​​minoxidil liquid and foam. These two ingredients contain the same active ingredient, which means they are essentially identical, besides for the formulations they’ve been made in.

If there’s no difference between these products, you’re likely wondering why minoxidil foam was created. According to a report in the International Journal of Trichology, the foam version of minoxidil was thought to leave less residue on skin after application. It was also believed to deliver more of the active drug at a faster rate.

But there doesn’t seem to be any data showing that 5 percent minoxidil foam can deliver any more of the drug than 5 percent liquid minoxidil. And in an interview with one of researchers who led the original clinical trials on minoxidil foam, the main selling points of this product seemed to be largely based on ease of use.

“Many patients prefer a foam versus a solution that may drip on application to the scalp. The foam is not greasy…“

Professor of medicine in the divisions of dermatology and oncology at Duke University Medical Center, Durham, North Carolina, as published in, Reuters Health.

Developing this different formulation also allowed for alternative ingredients to be added, removed, or swapped in when making minoxidil products for hair loss. None of these alterations or substitutions would change the active ingredient, minoxidil, that’s responsible for hair regrowth. However, they could potentially reduce side effects, the risk of allergic reactions, and potentially even improve drug absorption.

Ultimately, whether you use minoxidil foam or liquid, you should experience the same improvements in hair regrowth. The only time you’re likely to see a difference between these two products is if you are allergic to an ingredient, like propylene glycol, that’s present in one product and not the other.

What are minoxidil’s side effects?

Like any other medication, minoxidil has a range of potential side effects. However, the issues minoxidil can cause are pretty mild. Since this drug is applied topically, its side effects are generally restricted to the skin on your scalp.

According to a study in the Journal of the American Academy of Dermatology, minoxidil’s side effects are also pretty rare. This article assessed minoxidil users’ side effects over the course of a year and found that less than 4 percent of users experienced issues.

According to this article and another study in the Journal of the American Academy of Dermatology, minoxidil’s side effects include:

What are the side effects of minoxidil foam?

These side effects occur more often when using products made with an ingredient called propylene glycol. According to a Recent Patents on Inflammation and Allergy Drug Discovery article, propylene glycol can be found in some (but not all) liquid minoxidil products. And the more propylene glycol is in a product, the more likely you’ll be to experience one of these reactions.

That being said, some foam products are also made with propylene glycol. If you’re considering switching from minoxidil serum to minoxidil foam, make sure you check the ingredients list before making your purchase.

How to apply minoxidil foam

Applying minoxidil foam is an easy, straightforward process. According to our experts and the Mayo Clinic, minoxidil can be applied in a few easy steps.

Pro Tip: Keep in mind that minoxidil should always be applied onto a clean, dry scalp. The medication needs to be applied twice a day, once in the morning and once in the evening, for best results.

How to apply minoxidil foam to long hair

Minoxidil is meant to be applied to your scalp, rather than your hair. This means that the application process is the same, regardless of whether or not you have long hair.

However, applying minoxidil foam to long hair is considered to be one of the downsides to this product. Long-haired users of minoxidil foam sometimes find that the foam can get stuck in hair, preventing it from being applied to the skin properly.

If you have long hair and you’re struggling to use this product, consider trying liquid minoxidil. The serum can be easier to apply and spread over parts of your scalp where you’d like to improve hair regrowth.

Generic minoxidil foam and Rogaine foam are essentially identical. Both are sold in concentrations of 5 percent, and both contain the same active ingredient: minoxidil.

If you feel like paying top dollar for Rogaine foam, no one’s stopping you. But there’s nothing to state that this brand name product  is any more effective than any generic version of minoxidil. The only difference is that Rogaine foam has been around longer since they were the original owners of the patent for this hair loss treatment.

Minoxidil foam is a safe and effective way of stopping hair loss and improving hair regrowth. But since this product is the newest version of minoxidil, it’s understandable if you’d rather try one of the more established products. In that case, consider using liquid minoxidil. The 5 percent solution is thought to be the most effective for men, and it’s just as effective as minoxidil foam.

Platelet-rich plasma (PRP) treatments extract PRP from your blood and inject it back into your scalp. When PRP is administered into areas where you’ve seen hair loss, hair follicles in that region are stimulated and prompted to start producing hair again.