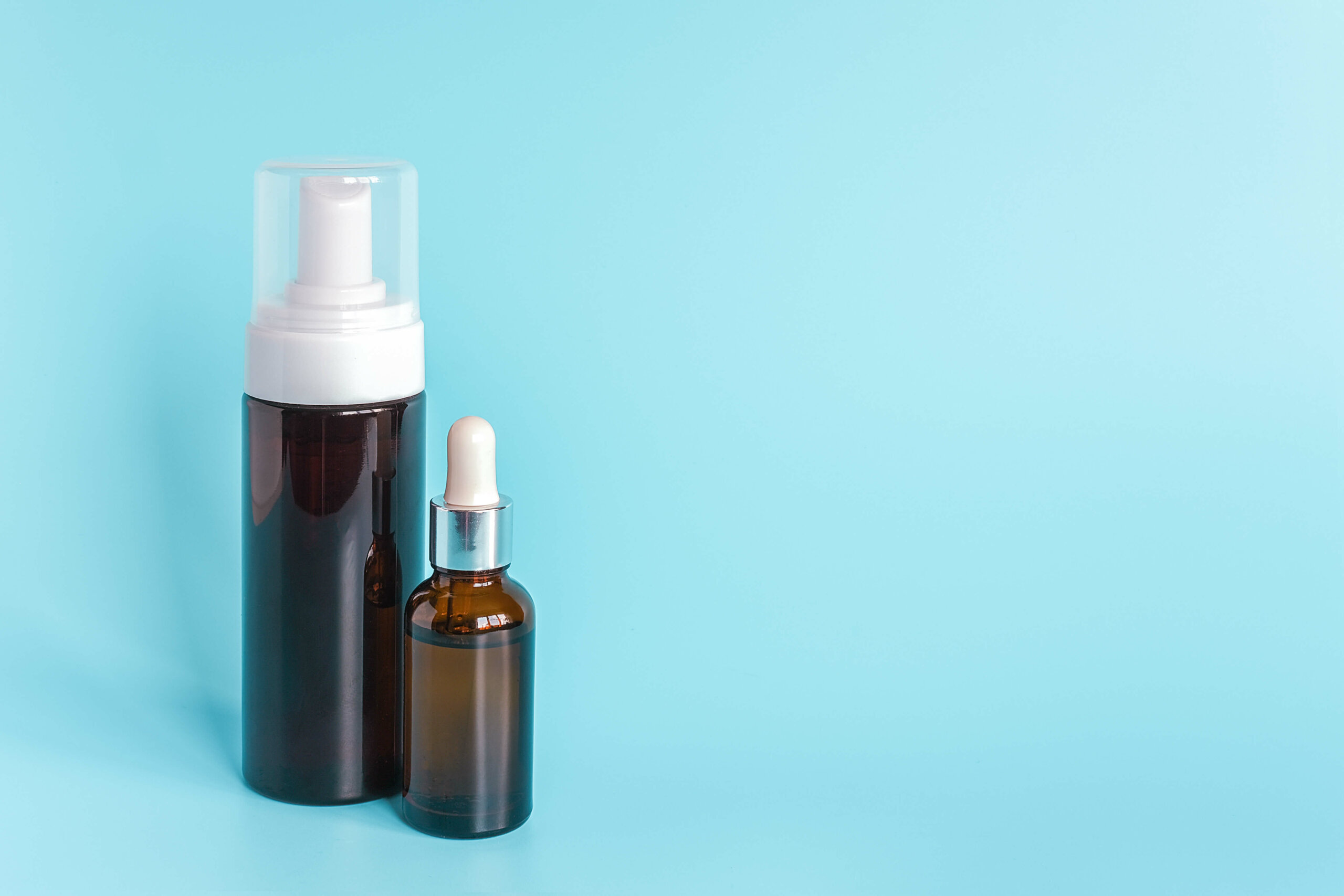 Minoxidil foam and liquid are both FDA-approved in concentrations of 2 and 5 percent.

Minoxidil foam and liquid are two types of topical minoxidil. This drug is approved for the treatment of male pattern hair loss, though it’s occasionally used to treat other conditions, too.

There’s not much difference between minoxidil liquid and foam. That being said, the liquid version has an ingredient called propylene glycol that people sometimes react to. Since foaming minoxidil lacks this ingredient, it can be a better choice for folks with sensitive skin.

Minoxidil is a drug that’s been around since the 1970s. According to StatPearls Publishing, this medication was initially developed as a peripheral vasodilator, helping lower blood pressure.

Minoxidil was successful as an anti-hypertensive drug, but it came with side effects. About 20 percent of people taking oral minoxidil found themselves experiencing a strange side effect: hair growth.

This particular type of hair growth, formally called hypertrichosis, caused a range of symptoms. While some balding men started seeing some of the hair on their heads grow back, other people saw hair sprout from areas where they’d never had hair, like their foreheads or hands.

Scientists saw this side effect in a positive light – especially since they knew of no other drugs that could combat hair loss. By the late 1980s, they’d developed a liquid minoxidil as a treatment for androgenic alopecia (male pattern hair loss).

Nearly two decades after minoxidil liquid was developed, a foam version of minoxidil was approved by the FDA as an alternative version of the drug. The main difference between foam minoxidil and the original liquid version is the presence of a single ingredient: propylene glycol.

“The foam formulation [of minoxidil] does not have propylene glycol, an agent that commonly causes irritation and occasionally causes an allergic contact dermatitis.“

professor of medicine in the divisions of dermatology and oncology at Duke University Medical Center, Durham, North Carolina, as published in , Reuters Health.

It’s possible that foaming minoxidil was developed to simply get rid of an ingredient known for causing skin-related side effects. Or, it might have been developed to give liquid minoxidil users a more convenient, faster-drying alternative.

A report in the International Journal of Trichology states various benefits of minoxidil foam, all of which could have been part of the rationale behind why it was created. For instance, foam was thought to deliver a greater amount of drug onto the skin compared to other types of solutions, like serums, lotions, or creams.

Of course, not everyone agrees. For example, a letter to the editor published in the Indian Journal of Dermatology hypothesized that liquid minoxidil’s skin-related side effects actually indicate better absorption of the drug.

If foaming drugs do have better absorption properties, it’s likely that scientists were aiming to create a more effective version of topical minoxidil by developing minoxidil foam. But so far, no clinical trials compare minoxidil liquid vs. foam. Until then, we have to assume that the two solutions are equally effective.

There’s no proof that states minoxidil foam is better than minoxidil serum, or vice versa. The main difference between the two products is the propylene glycol that’s in one and not in the other.

Both minoxidil serum and foam are approved by the FDA in two concentrations: 2 percent and 5 percent. Other concentrations of minoxidil are sold, but these products aren’t FDA-approved as hair loss treatments. Lower concentration products, like 1 percent minoxidil, might not work very well since they’re weaker.

If you’re a liquid minoxidil user who experiences side effects like irritation, dryness, scaling, itching, or redness, there’s a good chance you’re reacting to the propylene glycol in this product. If these side effects are occasional, it might not be a big deal. But frequent or recurring issues of this type could be indicative of scalp inflammation or dermatitis, which would be bad for hair regrowth.

If you experience unpleasant side effects like these regularly, you’d be best off switching to minoxidil foam and seeing if those symptoms go away. Skin-related issues can still occur with minoxidil foam, but they’re much less likely due to the lack of propylene glycol.

If you don’t experience any side effects when using minoxidil, choosing between these two solutions really just comes down to personal preference. Minoxidil foam is faster drying than minoxidil serum, which makes it less likely to drip and less time consuming to apply. The International Journal of Trichology study also mentioned that people have found minoxidil foam easier to fit into their daily routines.

In contrast, some people who prefer using minoxidil serum over foam find it easier to apply because it doesn’t get stuck in their hair. Minoxidil liquid can also be easier to spread over your scalp if you have various areas where you’re trying to see hair regrowth.

Both liquid and foam minoxidil take the same amount of time to work. StatPearls says that you can start to see results after about 8 weeks. Minoxidil’s full effects appear after about 4 months.

Whether it’s the liquid or foam version, minoxidil works in the same way. Yet, despite being around for several decades, researchers still aren’t completely sure how this drug promotes hair growth.

Scientists are certain that minoxidil works as a vasodilator, increasing blood flow to the scalp. They also know that the drug prevents scar tissue from forming. However, minoxidil might be working in a variety of other ways, too. According to StatPearls, minoxidil might be able to:

According to a study in the Dermatologic Clinics journal, the hair growth cycle is made up of three stages: the anagen, catagen, and telogen phases. The hair growth cycle starts with the anagen phase (also known as the growth phase), which lasts about 3 years. Hair grows around 1 centimeter (0.4 of an inch) per month during this time.

The hair growth cycle ends with the exogen phase, where the hair fiber is shed. This is the reason why it’s normal for you to lose a few hairs each day: those hairs are in the exogen phase. Usually, a new anagen phase starts shortly after.

Minoxidil is thought to work by influencing the hair growth cycle. StatPearls Publishing says that it essentially shortens the telogen phase and extends the duration of time hairs spend in the growth phase.

This is part of the reason minoxidil users tend to experience a sudden burst of hair shedding at the start of their hair loss treatment. Obviously, this side effect is short lived and only lasts until the hair follicles re-enter the anagen phase.

Today, minoxidil remains the only topical, FDA-approved treatment for pattern hair loss. It has been shown to thicken hair strands, stop hair loss, and promote hair regrowth. Notably, it’s not just able to do this for androgenic alopecia — minoxidil can also help counteract hair loss caused by other conditions.

Although not FDA-approved for other types of hair loss, StatPearls Publishing says that minoxidil is also sometimes used to help combat:

Minoxidil is also used as a complementary hair loss treatment alongside hair transplants. Using minoxidil before having a hair loss surgery can help people get better results and experience fewer side effects.

Minoxidil was the first FDA approved hair loss treatment to ever be created. Today, it remains the only topical hair loss medication you can take for androgenic alopecia. Both 2 and 5 percent concentrations of minoxidil are FDA-approved for pattern hair loss.

Minoxidil liquid and foam are both considered to be equally effective — or at least, there are no studies that prove otherwise. Unless you have sensitive skin or a propylene glycol allergy, there are no real differences between these products. Feel free to use either minoxidil: Choosing one over the other really comes down to your personal preference.