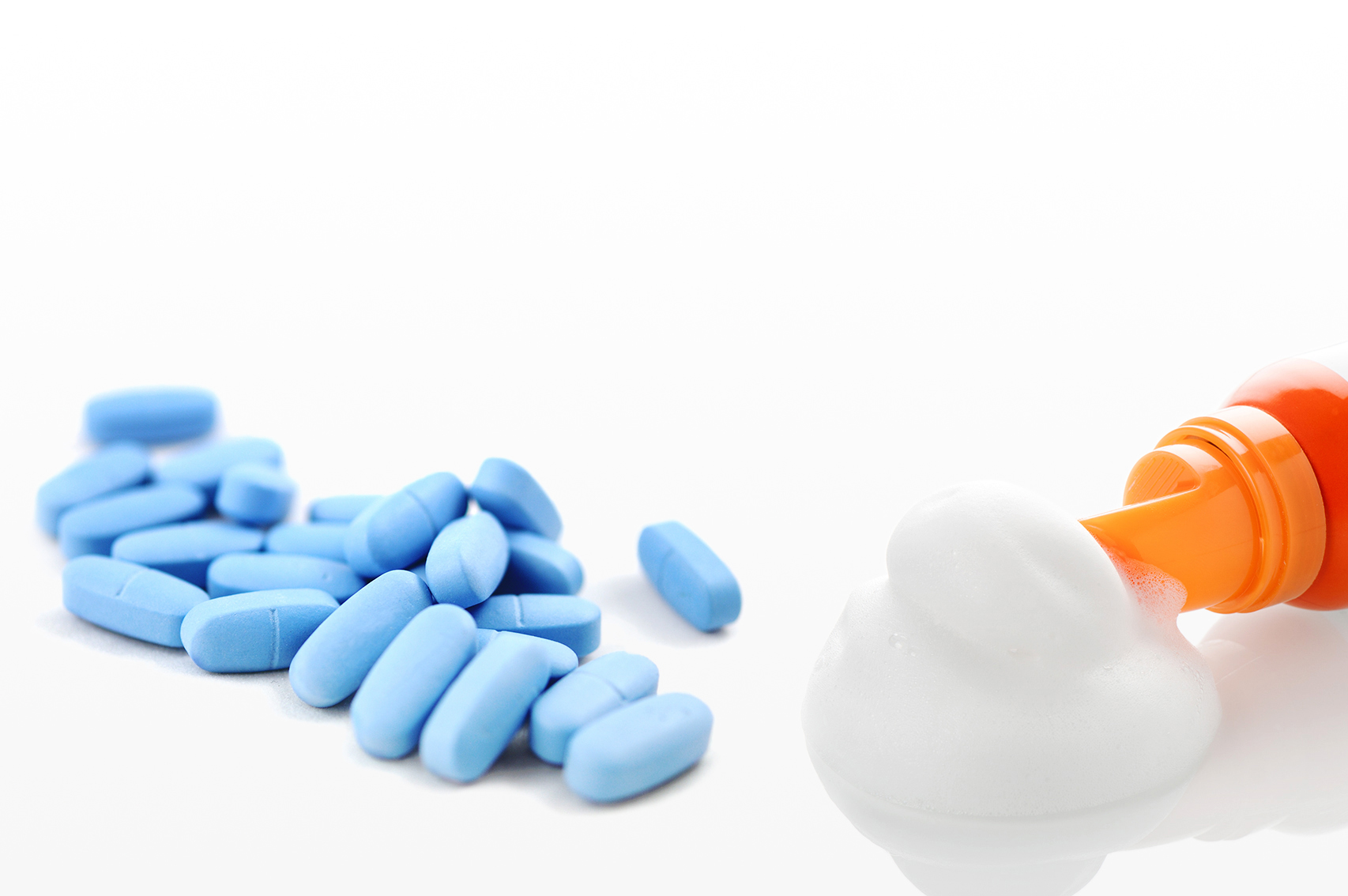 Androgenic alopecia, commonly known as male pattern hair loss, is the most common cause of balding. This progressive condition is known to affect many older men, but it can actually affect both women and men of any age.

Over time, pattern hair loss will eventually cause you to go bald. The only way to stop it from causing baldness is to start a hair loss treatment. Ideally, you should use one of the ones that the Food and Drug Administration (FDA) considers to be safe and effective.

If you or some of your family members struggle with pattern hair loss, you’re probably familiar with the two most popular treatments available: minoxidil and finasteride. Both of these drugs are FDA-approved androgenic alopecia treatments.

Which is better, minoxidil or finasteride?

Both minoxidil and finasteride are treatments that have been around for a few decades. This means that they’ve been tested in countless clinical trials and assessed in various formulations. Both of these treatments are considered to be effective at counteracting the progression of androgenic alopecia and helping you regrow hair.

And actually, neither minoxidil nor finasteride were developed as treatments for androgenic alopecia. Minoxidil was originally created as a blood pressure reducer. Finasteride, on the other hand, was designed to treat enlarged prostates (specifically caused by a condition called benign prostatic hyperplasia).

Given the original reasons they were created, both of these hair loss drugs work in different ways. That’s part of why they’re both solid choices when trying to treat pattern hair loss. Even if one doesn’t work for you, the other one certainly could.

But the real question you’re likely wondering is if finasteride is better than minoxidil, or if minoxidil is better than finasteride. At the end of the day, both of them definitely do work. Whether or not one is better than the other might come down to your daily routine and the side effects that you find acceptable. Both of these medications need to be administered daily and will need to be taken long-term.

Minoxidil has been around since the 1970s. It was originally designed as an oral drug that could help treat severe hypertension. But a substantial number of people taking this medication developed a weird side effect: hypertrichosis. This condition, which is defined as an excessive amount of hair growth that may occur anywhere on the body, is what led to minoxidil being re-formulated as a hair loss treatment.

According to StatPearls Publishing, topical minoxidil became available as an androgenic alopecia treatment in 1987. The FDA has now approved it in two main forms: liquid and foam.

Despite it being around for so many years, minoxidil’s mechanism of action as a hair loss treatment is not fully understood. Studies published in the Drugs Journal and Drug Design, Development and Therapy journal say that this drug might also work by:

To use minoxidil for androgenic alopecia, all you need to do is apply it twice a day. Typically, people apply it in the mornings, after they shower, and put it on again a few hours before going to bed.

Are there any downsides to using minoxidil?

Minoxidil has very few serious side effects. The vast majority of issues associated with this drug are topical and temporary.

According to the Journal of the American Academy of Dermatology and Recent Patents on Inflammation & Allergy Drug Discovery, common potential side effects include:

Some of these side effects are a type of allergic reaction.They’re actually associated with an ingredient in the minoxidil formulation rather than the minoxidil itself.

If you experience unpleasant side effects after using minoxidil, you might want to try switching to a different product. Some minoxidil products, particularly the liquid serums, are made with an ingredient called propylene glycol. People who react to this ingredient may have better luck using minoxidil foam, which doesn’t contain this additive.

Which minoxidil is best for androgenic alopecia?

Minoxidil is mainly available as a liquid serum or a foam. Both of these are considered to be pretty much the same (besides for the propylene glycol).

You might also find a variety of other minoxidil products, from minoxidil shampoo to minoxidil lotion, sold. Just be aware that these alternate products are not FDA-approved and may not be as effective.

It’s hard to say much about potential side effects and adverse reactions when using minoxidil products like lotions or shampoos. Since these products aren’t FDA-approved, they might not be made with the same formulations each time and may also include allergenic ingredients.

It’s technically safe to try higher concentrations of minoxidil. Just be aware that studies, like this one from the Journal of Dermatological Treatment, have reported an increased risk of side effects when using concentrations above 5 percent.

Being aware of these side effects is important. Although you might not see side effects like redness, itchiness, or swelling as particularly bad, these issues (and other symptoms associated with contact dermatitis) can actually aggravate your skin and worsen your hair loss. If you have a very sensitive scalp, this topical hair loss treatment might not be right for you.

Finasteride was approved as a medication for benign prostatic hyperplasia (BPH) in the early 1990s. According to StatPearls Publishing, it was approved as a treatment for androgenic alopecia shortly after, in 1998.

If you’re using finasteride for hair loss, you’re taking a much smaller dose than you would for BPH. The recommended dose for pattern hair loss is just 1 milligram a day, while people with an enlarged prostate need five times this dose.

While the 1 milligram daily dose may seem small, many studies have shown that this tiny dose is very effective in treating pattern hair loss. A study looking at 2,561 men in the Journal of Dermatology reported that over 87 percent were able to achieve some improvement in hair regrowth. The study found that hair growth:

Does finasteride work as well as minoxidil?

Finasteride and minoxidil are both thought to be safe and effective for androgenic alopecia. And according to a meta-analysis published in The Journal of the European Academy of Dermatology and Venereology, finasteride (when taken in the standard 1 milligram doses) and 5 percent minoxidil are equally effective in treating pattern hair loss.

But some studies report finasteride to be a slightly stronger treatment than minoxidil. For example, some clinical trials, like this study published in Dermatologic Therapy, report that there are pretty big differences between 1 milligram doses of finasteride and 5 percent topical minoxidil. This study reported that 80.5 percent of finasteride users had positive hair regrowth results after 12 months, compared to just 59 percent of minoxidil (5 percent solution) users over the same period.

It wouldn’t be strange for finasteride to work slightly better than minoxidil. The drug specifically targets one of the key aspects of androgenic alopecia: your hormones.

Finasteride is a DHT (dihydrotestosterone) blocker. DHT is a type of hormone that’s capable of affecting hair follicles.

In people with androgenic alopecia, DHT binds to the hair follicles and causes them to shrink. For a while, hair continues to be produced — but the strands are thinner than they used to be. As the hair follicle continues to shrink, weaker, smaller hair strands grow. And eventually, the follicle stops producing hairs altogether.

Finasteride suppresses DHT levels and prevents DHT from binding to the hair follicle. It essentially stops this whole series of events from happening, which means that it stops the progression of androgenic alopecia and can help prompt hair follicles to produce thicker, stronger hairs.

All this probably sounds pretty great, right? The only downside is finasteride’s side effects. While this medication is definitely effective, it’s also infamous for causing serious sexual side effects. Some of these issues are thought to persist even after a person stops taking the medication.

Finasteride’s side effects are infamous. According to a study in the Journal of Drugs in Dermatology, oral finasteride is capable of causing a myriad of unpleasant side effects in men, including:

Although severe finasteride side effects can be rare, they can also be serious. This is one of the main reasons that researchers are exploring the use of topical finasteride solution. The Journal of Drugs in Dermatology reported that topical finasteride only causes milder issues, like scalp irritation, sore throat, headaches, dizziness, testicular pain, and increased liver enzymes.

Can you take finasteride and minoxidil together?

Clinical trials, like the previously mentioned study published in Dermatologic Therapy, have been exploring the use of this combination treatment and seen positive results. According to this study, taking both finasteride pills and applying minoxidil solution is better than taking either drug on its own.

There have also been some studies exploring novel mixtures of these drugs – including a finasteride and minoxidil topical solution. For example, a report in the Indian Dermatology Online Journal recently discussed successful use of a 5% topical minoxidil fortified with 0.1% finasteride. Nearly 85 percent of the people using this treatment maintained good hair density.

Another article, published in The Journal of the European Academy of Dermatology and Venereology, reported that a topical solution of 0.25% finasteride mixed with 3% minoxidil produced better results than 3 percent minoxidil. Around 90 percent of the people using this combination treatment showed improvement in hair growth. And best of all, they didn’t experience any increase in side effects.

What about combined finasteride and minoxidil pills?