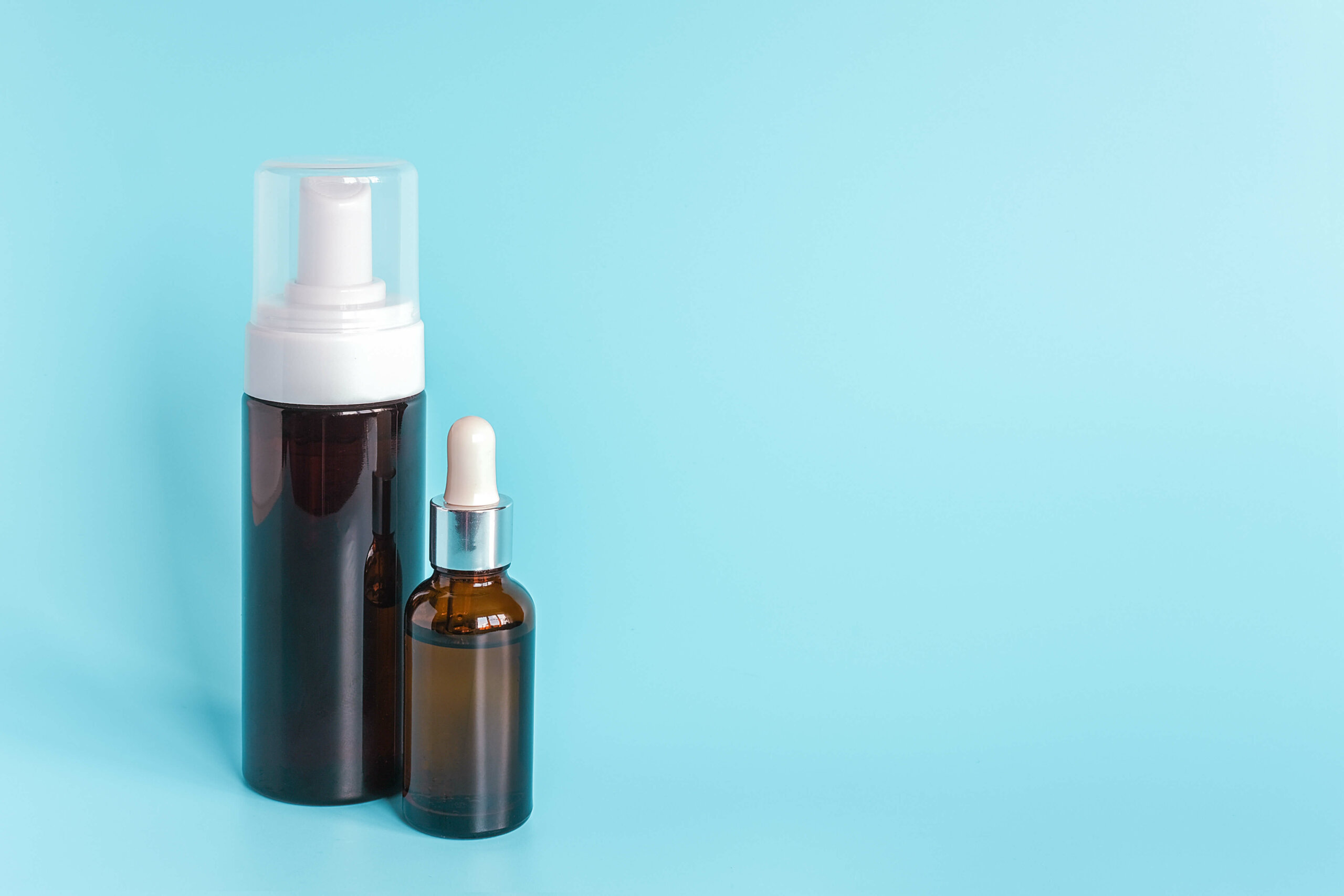 Minoxidil serum and foam are available as FDA-approved treatments for pattern hair loss.

Minoxidil was the first medication to ever be FDA-approved as a hair loss treatment. Originally developed as an oral blood pressure drug, minoxidil was turned into a topical treatment in the late 1970s when researchers realized it could help stimulate hair growth.

Since it’s approval as a pattern hair loss (androgenic alopecia) treatment in 1986, minoxidil has been approved in different concentrations and formulations. You can buy it as a liquid or foam in concentrations of 2 or 5 percent, though 5 percent solutions are thought to be most effective.

Even though it was the first hair loss treatment to be approved by the Food and Drug Administration, minoxidil is still the only topical hair loss treatment available for men and women. Regardless of whether they’re applying the 2 percent or 5 percent solution, users seem content with minoxidil’s effects. According to an article in The Pharmaceutical Journal, 10,120 minoxidil users considered this medication to be excellent, good, or fair in slowing or stopping hair loss.

Minoxidil is considered to be quite effective at halting the progression of androgenic alopecia and stimulating hair regrowth. According to clinical trials in the Skin Pharmacology and Physiology journal and the Journal of the European Academy of Dermatology and Venereology, it can improve hair density, hair thickness, and overall hair coverage in men with androgenic alopecia. It’s also been found to increase hair growth at the crown, temples, and front of their heads.

Who should use minoxidil?

People who have allowed their hair loss to progress further can still use minoxidil. However, if hair loss has become very extensive, they may need to consider another solution, like follicular unit transplantation (FUT) or follicular unit extraction (FUE) hair transplant surgery.

Minoxidil is only FDA-approved for the treatment of androgenic alopecia, but according to StatPearls Publishing, it can also be used off-label to treat several other types of hair loss, including:

Minoxidil is often recommended for people to use before and after hair transplants. Applying minoxidil in the weeks before and after the surgery can minimize stress-related hair loss caused by the procedure and improve hair regrowth.

According to StatPearls Publishing and studies in the Drugs Journal and the Drug Design, Development, and Therapy journal, minoxidil is thought to:

Minoxidil works as a vasodilator, opening up blood vessels. This is actually the same way it works when used as a blood pressure reducer – except that when applied topically, it’s absorbed through your skin, increasing blood flow to your scalp and hair follicles.

The Pharmaceutical Journal study recommends using minoxidil for at least 3 months before you decide whether or not it’s working well. This is mainly because it takes time for minoxidil to affect the hair growth cycle. Although you can’t see it working, minoxidil is helping your follicles produce new hair strands, turning the thin vellus hairs (similar to the peach fuzz hairs found across your body) into darker terminal hairs, like the ones that grow on your head or beard.

Even when a new hair sprouts from a follicle, you’ll need to be patient before you can truly see results. According to a study in the Dermatologic Clinics journal, it takes about a month for hair to grow 1 centimeter (0.4 of an inch).

Should I use minoxidil liquid or foam?

Liquid and foam minoxidil are almost exactly the same. They both have the same active ingredient and take the same amount of time to work. There are no studies showing that foam is better than liquid or vice versa.

The main difference between these products is that minoxidil foam is considered to be faster drying than liquid minoxidil. This can make it faster and easier to apply to bald patches. But if you have longer hair, you might find the liquid serums to be more convenient as they’re less likely to get stuck in your hair.

There’s also one ingredient often found in liquid minoxidil that isn’t always in minoxidil foams: propylene glycol. This ingredient is a common culprit behind minoxidil allergies and has been found to increase minoxidil side effects for some people.

Does minoxidil have side effects?

Like all medications, minoxidil has a range of potential side effects. That being said, the Journal of the American Academy of Dermatology study says that topical minoxidil’s side effects are pretty rare. This study looked into the side effects that minoxidil users reported over the course of a year and found that less than 4 percent of participants experienced negative side effects.

Minoxidil users are most likely to experience skin-related side effects. These issues are often limited to the area of the scalp where the solution was applied. According to both Journal of the American Academy of Dermatology studies, minoxidil side effects include:

Uncommon vs. common minoxidil side effects

According to the Journal of the American Academy of Dermatology study, temporary hair shedding is the most common minoxidil side effect, affecting up to 17.5 percent of minoxidil users. However, this temporary side effect can occur with just about any hair loss treatment.

Minoxidil hair shedding is thought to be caused by the way this drug affects the hair growth cycle. Minoxidil is thought to shorten the resting (telogen) phase, causing this short burst of increased shedding. Fortunately, since minoxidil also extends the growth (anagen) phase, you don’t have to worry too much. New hairs tend to grow back thicker, stronger, and healthier.

A review in the Journal of the American Academy of Dermatology says that minoxidil shedding usually lasts about 3 to 6 weeks. For most people, this side effect should go away within 4 weeks.

Out of the remaining potential issues minoxidil can cause, the most common reported side effects are mild symptoms, like redness, irritation, dandruff, or an itchy scalp. A study in Recent Patents on Inflammation & Allergy Drug Discovery says that these side effects are often more likely when minoxidil products are made using propylene glycol.

Other side effects, like hypertrichosis, are uncommon with FDA-approved concentrations of topical minoxidil but may occur more frequently when using extra-strength or oral products. According to the Recent Patents on Inflammation & Allergy Drug Discovery study, hypertrichosis only occurs in 1 percent of men. However, the Journal of American Academy of Dermatology article says that this side effect affected about 25 percent of people. However, the areas affected weren’t entirely undesirable, since the hypertrichosis was causing hair growth around the men’s temples and sideburns.

Another rare issue that may occur after using minoxidil is hair discoloration. Minoxidil has been known to add a slightly yellow or green tone to hair. But this problem isn’t really a minoxidil side effect; it’s typically caused by cheap manufacturing or the addition of coloring agents.

Can you be allergic to minoxidil?

Unfortunately, it’s definitely possible to be allergic to minoxidil. The good news is that the most common minoxidil allergy is caused by a specific ingredient: propylene glycol. This ingredient is often found in liquid minoxidil products, but isn’t usually in minoxidil foams.

Propylene glycol typically causes mild allergic reactions that cause skin conditions like irritant contact dermatitis and allergic contact dermatitis, or make existing problems, like seborrheic dermatitis, worse. According to an article in the Journal of the American Academy of Dermatology, people experiencing these problems typically report issues like a red, irritated, scaly scalp. If you’ve experienced dermatitis or similar symptoms after using topical minoxidil, try switching to a different minoxidil product type, concentration, or formulation, like minoxidil foam.

Of course, not every minoxidil allergy is caused by propylene glycol. A recent case study in the journal Cureus reported that a 27-year-old experienced allergic contact dermatitis symptoms and face swelling after using minoxidil foams made with and without propylene glycol. However, it’s pretty rare to be allergic to minoxidil itself and very few cases of this allergy have been reported.

If you suspect that you have a serious allergy to minoxidil, Memorial Sloan Kettering Cancer Center says you should look out for symptoms like:

Memorial Sloan Kettering Cancer Center and the FDA also recommend consulting your doctor if you:

Where to buy minoxidil

Minoxidil is an over the counter drug that you can purchase at most pharmacies. Most stores stock multiple types of generic minoxidil, as well as the well-known brand name Rogaine® (which is sold as Regaine® in some countries).

You can also purchase minoxidil in bulk if you’re a member at wholesale stores like Costco and Sam’s Club. But you’d rather not have dozens of minoxidil bottles around the house, buying minoxidil online can often be the most affordable option, particularly if you sign up for a recurring subscription.

​​Despite the differences in name, there’s really no major difference between a minoxidil that’s generic and Rogaine. Whether you’re buying a generic product or branded one, they all contain the same active ingredient.

Different brands may contain slightly different inactive ingredients, but all minoxidil products work in the same way. This means that myhair Minoxidil is just as effective as Rogaine.