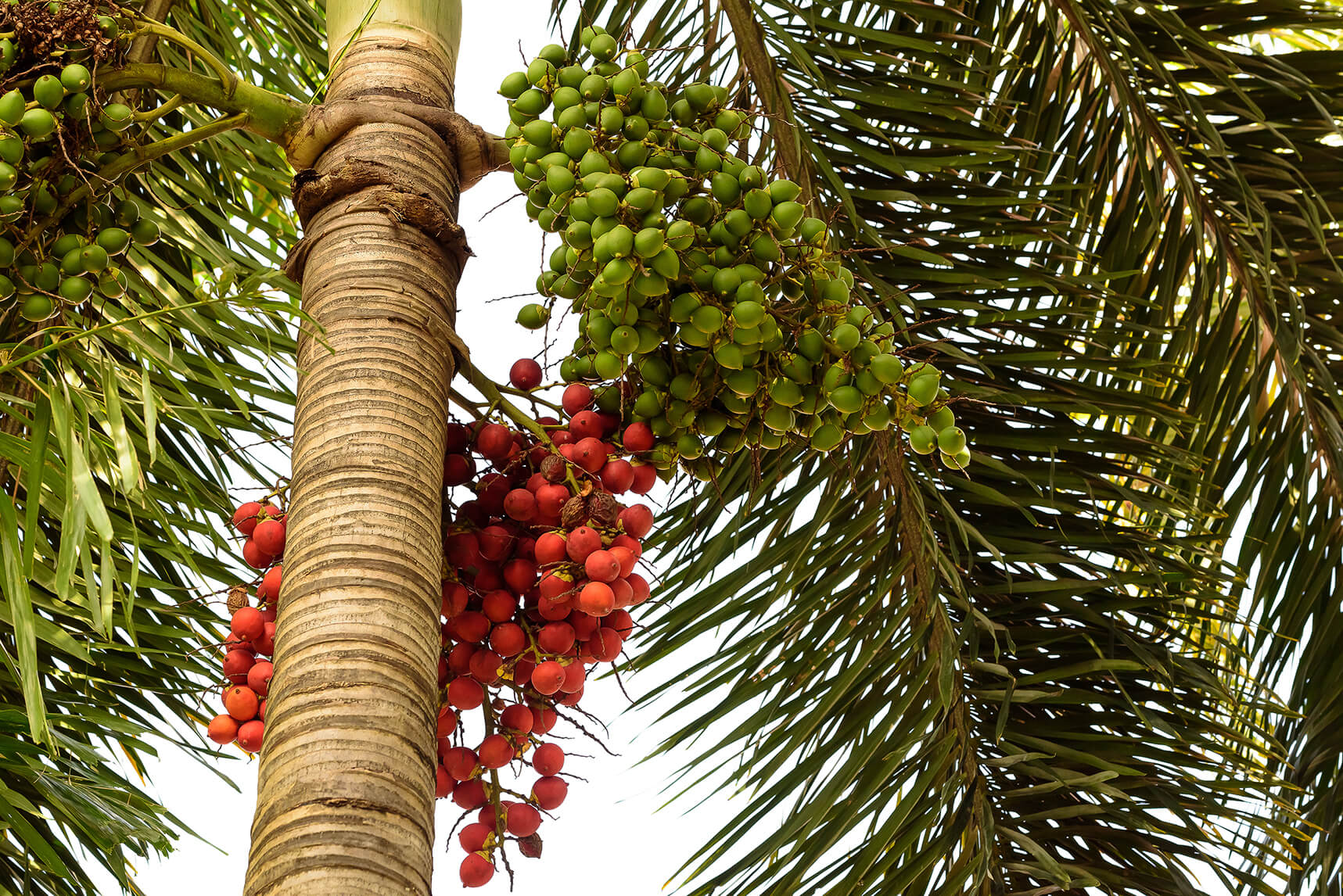 Saw palmetto is a plant-based DHT blocker that’s becoming increasingly popular as a treatment for pattern hair loss. While this plant extract isn’t an FDA-recommended treatment option, it’s safe to consume and rarely causes side effects. If you’re unenthused about using FDA-approved medications and would prefer a more natural treatment option, saw palmetto could be exactly what you’re looking for.

What is saw palmetto?

Saw palmetto is a small, shrub-like palm tree that’s native to the southeast USA. It produces large, seeded berries that initially look green, then turn yellow, and eventually darken to a blackish color as they ripen.

Saw palmetto has been used as a natural remedy since at least the 17th century. According to a publication in JAMA, saw palmetto berries were used by the American Indians in Florida around this time. They used the berries to treat erectile dysfunction, prostate gland inflammation, and testicular atrophy.

These days, saw palmetto is still used to try and resolve a variety of conditions. The National Institute of Health’s National Center for Complementary and Integrative Health says that these include prostate and urinary tract problems, pelvic pain, migraines, and hair loss.

Why is saw palmetto used for hair loss?

Saw palmetto is thought to be a natural DHT (dihydrotestosterone) blocker. DHT is one of the major hormones thought to be behind the most common type of hair loss, androgenic alopecia (also known as male pattern baldness). In large amounts, DHT can affect your scalp’s hair follicles and their ability to produce hair.

Blocking DHT isn’t the only strategy people use to counteract androgenic alopecia. The Food and Drug Administration has also approved topical medication, minoxidil, that increases blood flow to the scalp, and low level laser therapy, which uses a light-based device that stimulates hair follicles.

That being said, the only oral FDA-approved treatment for this type of hair loss works in the same way. This medication, known as finasteride, is a potent DHT blocker. Notably, it’s also used to treat prostate issues, like benign prostatic hyperplasia… just like saw palmetto.

How is saw palmetto used for hair loss?

Saw palmetto is usually incorporated into dietary, cosmetic, and pharmaceutical products as an extract. If you’re considering using saw palmetto for hair loss, any of these products can work for you.

When you see the name saw palmetto on a cosmetic or pharmaceutical product, it specifically refers to the berries of this plant and a powder or extract that’s been created from them. Saw palmetto extract is produced by ripening the berries until they become a mostly black color. The berries can then be turned into a liquid extract, or might be dried and ground into a powder. At this stage, they can be infused into a variety of products, including dietary supplements, nutraceuticals, shampoos, hair masks, and even herbal teas.

Pro Tip: A large amount of saw palmetto is wild harvested. If you live in the southeastern USA, you might actually find this plant growing in your neighborhood or local park. If you have access to fresh saw palmetto, it’s perfectly safe to eat the berries of this plant. Just make sure that they’re ripe (black) or starting to ripen (yellow with darkening regions).

Saw palmetto has been reported to improve hair thickness, density, and quality, according to a recent review published in the journal Skin Appendage Disorders. Although research on this plant’s potential is limited, this review reported that saw palmetto was able to stop the progression of pattern hair loss and could support hair regrowth.

The Skin Appendage Disorders article reported on studies that assessed both topical and oral formulations of saw palmetto extract. But all of these studies were quite different.

In some cases, saw palmetto was used on its own, while in others, it was combined with other natural ingredients. This meant that multiple ingredients could have contributed to counteracting pattern hair loss symptoms.

Saw palmetto works best when combined. That’s why we’ve infused it into both Nutrients and Shampoo.

It’s important to note that this recent review only found seven studies assessing the effectiveness of this plant extract on people with androgenic alopecia. Although promising, the research on this plant is still new and very limited.

As of the moment, there have been few National Institutes of Health (NIH) studies assessing saw palmetto’s potential as a natural DHT blocker. To date, the NIH have only funded studies to assess saw palmetto’s effectiveness in treating benign prostatic hyperplasia (BPH).

Although other studies have found that saw palmetto was successful in reducing BPH symptoms, these NIH studies did not. Given the limited research on this subject, this doesn’t mean that saw palmetto doesn’t work as a DHT blocker. It simply implies that saw palmetto might be weaker than other DHT-blocking medications, like finasteride.

Will saw palmetto work for everyone?

No hair loss treatment works for everyone. In saw palmetto’s case, it seems that it’s not effective in about 10 percent of people. Although this might seem like a large number, the Skin Appendage Disorders review study reported that this is the same amount of people who find finasteride to be clinically ineffective.

Finasteride and saw palmetto work in similar ways. If you already know finasteride doesn’t work well for you, there’s a good chance that saw palmetto won’t work well as a stand alone treatment, either. You might want to try another FDA-approved hair loss treatment, like minoxidil or low level laser therapy, or talk to your doctor about potential combination treatments.

Given the limited amount of research available on using saw palmetto for hair loss, there’s still not much research comparing this plant extract to hair loss medications. However, one clinical trial referenced in the Skin Appendage Disorders review compared finasteride against oral saw palmetto supplements.

Saw palmetto is often considered to be a weaker, more natural version of finasteride — as this study implies. So, why bother using a weaker hair loss treatment? Well, there’s another positive to saw palmetto: it lacks almost all of the side effects that finasteride causes.

Saw palmetto is only known to cause mild effects. Oral saw palmetto may cause mild gastrointestinal side effects, like nausea, constipation, and diarrhea. Topical saw palmetto has the potential to cause skin-related side effects like mild burning, itching, forehead acne, and allergic contact dermatitis. That being said, the majority of the studies discussed in the Skin Appendage Disorders review reported no side effects at all.

Unlike saw palmetto, finasteride comes with a variety of downsides. Despite being a popular FDA-approved hair loss treatment, finasteride users have reported unpleasant side effects, several of which are serious and can have long-term implications on health.

According to the U.S. National Library of Medicine, these include issues like:

Many men who find out about finasteride’s side effects might want to toss their medication out the window. But DHT blockers like finasteride really work, and are effective at treating androgenetic alopecia. So, what’s a guy to do?

If you’d like to incorporate a DHT blocker into your hair loss treatment routine, saw palmetto might be the answer you’ve been looking for. While it’s certainly less effective than finasteride, it’s unlikely to cause harm or be detrimental to your life in any way.

Saw palmetto is a nutraceutical hair loss treatment, extracted from the plant’s berries and turned into a topical solution or oral supplement. It’s thought to work as a natural DHT blocker, similar to the FDA-approved medication finasteride.

That being said, saw palmetto isn’t as strong as finasteride. However, a major upside is that it lacks all of finasteride’s negative side effects.

Saw palmetto research is still fairly new, and as a consequence, there are only a limited amount of studies on its use in the treatment of pattern hair loss. However, most studies have found that saw palmetto is capable of producing a positive effect, ranging from stopping the progression of androgenic alopecia to improving hair growth and density. The best results seem to occur when people use both topical and oral saw palmetto simultaneously.