A mature hairline is a perfectly normal, natural hairline change that all adults develop.

Do you feel like your hairline has changed since you were in high school? Maybe you’ve been seeing a larger amount of small, thin hairs framing your face. Or perhaps you just feel like your forehead is bigger than it used to be.

Don’t worry – these changes aren’t all in your head. It’s likely that you’ve simply developed a mature hairline. Unlike a receding hairline, a mature hairline is a perfectly normal part of aging.

Should I be worried about my mature hairline?

Hairline changes – especially if you feel like your hairline is further back than you’re comfortable with or that your hair’s thinner than it used to be – can be scary. The good news is that a mature hairline isn’t something you need to be concerned about. Unlike a receding hairline, a mature hairline is a natural part of aging. In fact, all hairlines change with age.

The term ‘mature hairline’ simply means that your hairline has changed from the concave shape you had when you were a child or teenager to a more convex shape. A study in the Facial Plastic Surgery Clinics Of North America Journal reported that this transition generally happens when men are between 18 and 29 years of age. 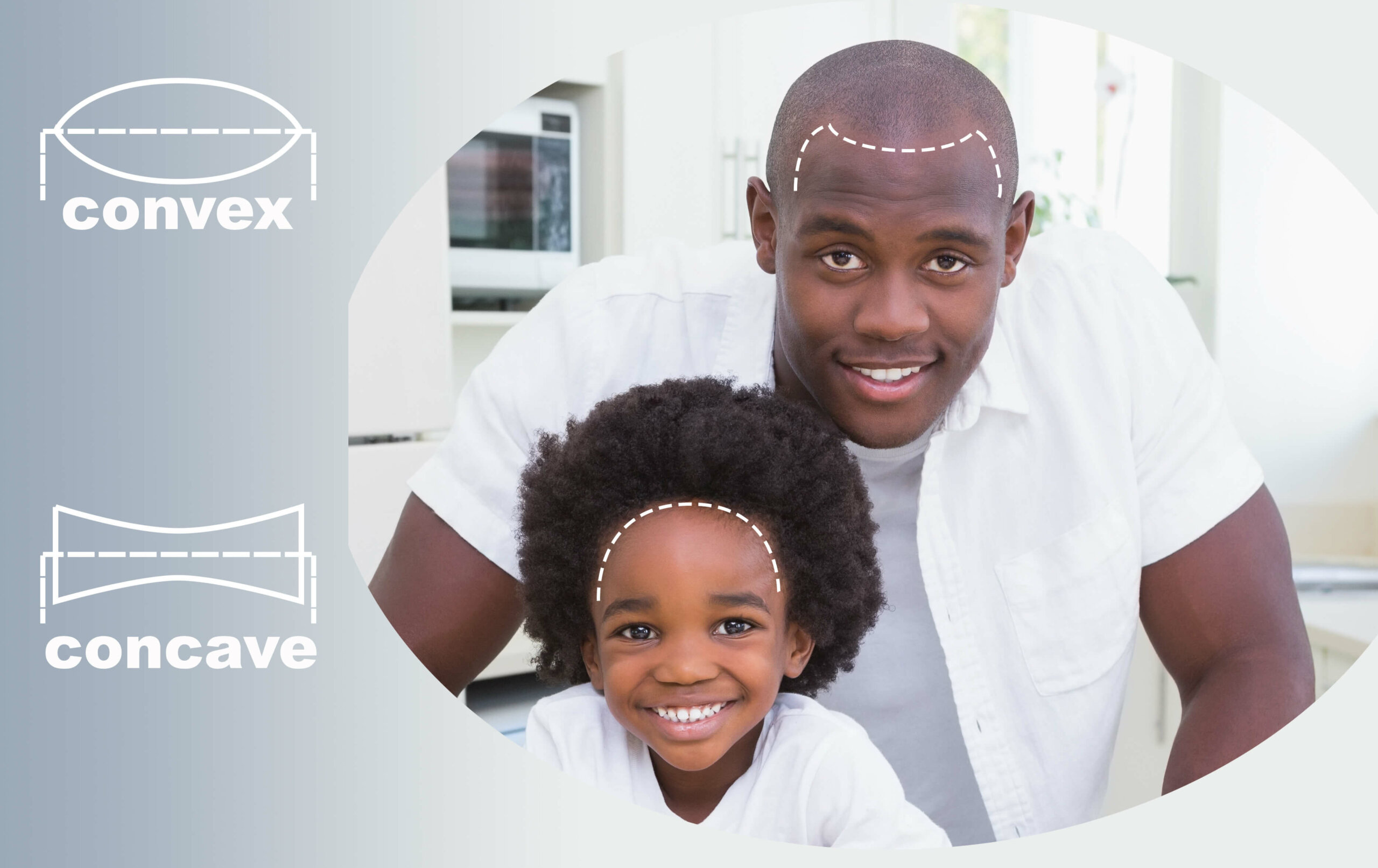 Signs of a mature hairline

It’s easy to say that a young person’s hairline (also known as a juvenile hairline) is convex, and an older person’s mature hairline is concave. But it’s not just the change in shape that makes a mature hairline significantly different.

As men’s hairlines mature, their temples are one of the main regions affected. Hair in these areas moves laterally upward, making the temples more pronounced and the sides of the forehead look larger. Additionally, the direction that hair grows in may also change, making this change more pronounced.

So why are so many people worried about developing a mature hairline? Mainly because most people associate receding hairlines with balding.

Does a mature hairline stop receding?

It’s perfectly normal for hairlines to recede a bit, creating a mature hairline as you age. But this change won’t occur overnight – it’s a change that occurs as you age and is usually established by the time you turn 30.

A hairline that continues to change after this age might not be related to the development of a mature hairline. This, combined with losing a larger amount of hair around your temples, could be a sign of hair loss – specifically, androgenic alopecia. If you feel like your hairline has continued receding, the easiest way to tell is to simply measure it.

How to measure a mature hairline

The Facial Plastic Surgery Clinics Of North America Journal study says that most men’s hairlines recede about 1.5 to 2 cm. If you feel like your hairline has receded more than this, the easiest thing to do is to simply find the highest wrinkle on your forehead.

To do this, wrinkle your forehead by raising your eyebrows. The wrinkle that forms at the very top of your head can help you identify the location where your juvenile hairline once was.

Then, measure the distance between this wrinkle and your hairline with a ruler or measuring tape. If you don’t have either of those, the Journal of Biomechanical Engineering says that the average person’s index finger has a width of 1.6 to 2 centimeters, so you can also just use your finger.

If your hairline is much wider than the width of your index finger, there’s a good chance your hairline has receded past the point of a mature hairline. You might have just identified one of the first signs of male pattern baldness.

A mature hairline doesn’t mean you’re losing hair, though it does involve your hairline receding (but only a bit). As people get older, their hairline naturally recedes further back. However, the exact way this change occurs can vary. Some people’s hairlines move back evenly, while others may find that specific areas, like the hair around their temples, are more distinctly affected.

In contrast, a receding hairline is a telltale sign of androgenic alopecia. This type of hair loss is also known as male pattern hair loss.

A person who has only just started to experience androgenic alopecia could find it difficult to differentiate a mature hairline from balding — especially if they’re in their late teens or 20s. This is because some of the first signs of androgenic alopecia are a receding hairline and hair loss around the temples.

A mature hairline shouldn’t cause further hair loss. In contrast, a receding hairline is progressive. Most hairlines form the quintessential ‘M’ shape, with hair loss increasing at the temples over time.

The center of the hairline isn’t immediately affected by androgenic alopecia. But left untreated, this hair loss disorder causes hairlines to continue to recede. Over time, the hairline gets pushed back. Hair stops growing back in the areas where it’s fallen out, ultimately making the person’s forehead appear very large.

Of course, a receding hairline and temple hair loss aren’t the only signs of androgenic alopecia. This progressive condition also causes hair loss at the crown, and eventually results in hair loss all along the top of the head, causing baldness.

Not everyone likes the hairline that they end up with as they get older. The bad news is that a mature hairline is an unavoidable and normal part of aging  — just like how your hair will eventually go gray or white.

Most people who don’t like their mature hairlines start by getting their hair cut or styled. Generally, people find that their forehead looks too large or their temples are too pronounced. They consequently end up growing out their hair, so that they can use a fringe or hair curtains to hide these parts of their face. However, a person can only use this strategy if they have a mature hairline  —  not a receding one.

If you find your hairline really distasteful, a more permanent strategy is hairline lowering surgery. This cosmetic surgery lowers and reforms the hairline, changing the shape of it. It even has the potential to reform it into your hairline’s previous, more juvenile form. Of course, surgical intervention isn’t for everyone. And this procedure won’t do anything to help if you have androgenic alopecia or any other hair loss disorder.

Androgenic alopecia is actually the most common form of hair loss. According to the U.S. National Library of Medicine, this type of hair loss affects around 50 million men in the USA. Over half of men over 50 experience hair loss symptoms.

The upside is that such a common condition also has a variety of treatments. The Food and Drug Administration (FDA) recommends using minoxidil, finasteride, or low level laser therapy to counteract hair loss symptoms and promote hair regrowth.

FDA-approved treatments for androgenic alopecia work in different ways. Minoxidil, a topical hair loss treatment, is a vasodilator. It essentially works by increasing blood flow to the scalp (and consequently, to the hair follicles on your head).

Finasteride is an oral medication that is essentially considered to be a hormone blocker. It’s thought to work by lowering levels of dihydrotestosterone (DHT), one of the hormones responsible for the progression of androgenic alopecia.

Low level laser therapy (LLLT) is the newest hair loss treatment approved by the FDA. This treatment uses devices that emit light at specific wavelengths to produce a biostimulatory effect. According to a  review in the Skin Appendage Disorders Journal, LLLT can counteract androgenic alopecia and improve both hair growth and hair density.

If your hairline has started visibly receding, it’s recommended that you start a treatment as soon as possible. Some people are able to regrow their hair with these FDA-approved treatment options, but they don’t always work for everyone. Other people are only able to stop the progression of androgenic alopecia — which means that the sooner you start a treatment, the better your results are likely to be.

These days, FUE is more popular than FUT, despite being more difficult for surgeons to perform. Although both of these procedures are effective, FUE is considered preferable since it doesn’t leave a scar.

Sometimes, both FUE and FUT are performed together. However, this is generally reserved for cases where androgenic alopecia has been allowed to progress into the later stages of hair loss. It’s also not uncommon for FDA-approved hair loss treatments like minoxidil to be used alongside these surgeries in order to enhance their final results.

If you really hate your hairline, you can cut your hair or even pursue a more permanent option, like hairline lowering surgery. But most hairline treatments are designed for people with a progressive receding hairline.

A receding hairline of this type is indicative of androgenic alopecia, otherwise known as male pattern hair loss. If you believe you’re experiencing androgenic alopecia, consider starting an FDA-approved treatment like minoxidil, finasteride, or low level laser therapy as soon as possible. The sooner you start a treatment, the better your results are likely to be. If not, your only option might be a hair loss transplant like FUE or FUT, which can be riskier and more expensive.