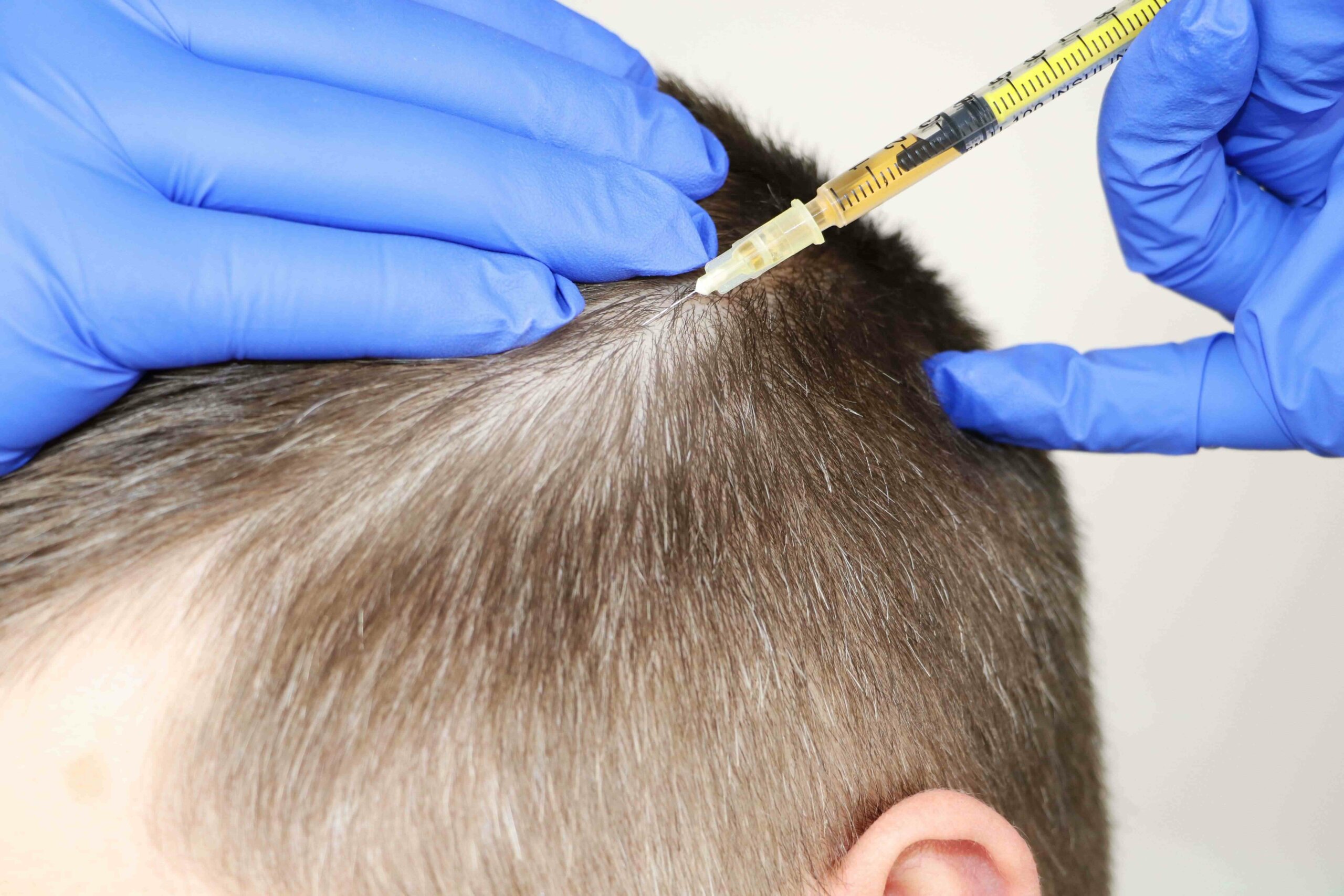 Platelet-rich plasma is injected into the scalp, where it works by stimulating hair follicles.

Platelet-rich plasma (PRP) is a treatment that’s used in a wide variety of medical conditions, including joint problems, skin issues, and muscle and tendon injuries. It’s been around since the 1970s. However, it’s only been used as a hair loss treatment for about a decade and a half.

PRP isn’t FDA-approved as a hair loss treatment, but clinical trials have shown that it can help. Using the PRP technique for hair loss can reduce hair loss and support hair regrowth. It’s also been combined with FDA-approved treatment options like minoxidil and finasteride, as well as with surgical procedures like hair loss transplants.

Platelet-rich plasma is just the fluid part of the blood (plasma) with a lot of platelets in it. Platelets are one of the components that make up blood. According to Harvard Health Publishing, they support coagulation and help your body heal injuries.

Plasma is a liquid that can be isolated from the body’s blood. The Cleveland Clinic says that it’s over 90 percent water, plus some salt, enzymes, antibodies, proteins, and clotting factors.

You might have heard about this liquid during the COVID-19 pandemic, when people who had recovered from the virus were asked to donate their plasma. Convalescent plasma, the blood plasma from people who’ve recovered from an illness, can help other folks with weak immune systems recover from the same illness.

How does PRP work?

When you get PRP for hair loss, you’ll go into a clinic, where a few syringes of your blood are drawn. This blood is then spun rapidly using a centrifuge. This process allows the red blood cells and platelet-poor plasma to be removed, while the platelet-rich plasma is extracted from those samples.

PRP is then intradermally injected into the areas of the scalp affected by hair loss, where it works by stimulating hair follicles. The whole process usually takes under an hour.

People usually get at least three treatments – one per month – and then have less frequent maintenance treatments every 3 to 6 months after. After a few treatments, it starts to affect the hair growth cycle. According to a review in the journal Medicina, PRP can encourage hairs to enter the anagen (growth) phase of the hair growth cycle, as well as extend the growth phase’s duration. This means that your hair spends more time growing and less time shedding, which can reduce hair loss.

Is PRP effective for hair loss?

PRP has been shown to have a number of benefits for hair, including reducing hair loss and improving hair density and growth. According to a study in the Dermatologic Surgery journal, its been used as a hair loss treatment in 2006.

PRP seems to be particularly effective as a treatment for androgenetic alopecia, also known as pattern hair loss. Androgenic alopecia is the most common type of hair loss and is mainly caused by a mixture of genetic and hormonal factors.

Many people with this progressive type of hair loss use FDA-approved treatments, like minoxidil, finasteride, or low-level laser therapy. If those don’t work well or if hair loss has progressed past a certain point, hair transplants, like follicular unit extraction and follicular unit transplantation, are also good options.

According to a study in the Journal of Skin and Stem Cell, PRP treatments were able to reduce hair loss and improve hair strength and regrowth in people with androgenic alopecia after just 3 months. These improvements were still seen after 6 months. Other studies, including the previously mentioned Dermatologic Surgery journal article, have reported similar results.

PRP safety and side effects

PRP is generally considered to be safe since it was extracted from your body and is simply being put back in. However, like all androgenic alopecia treatments, PRP comes with a few potential side effects. Some of these issues, like temporary hair shedding, tend to occur after you start using any hair loss treatment for the first time.

According to the previously mentioned studies and Johns Hopkins Medicine, other PRP injection for hair loss side effects include headaches, irritation, swelling, tenderness, and tissue or nerve damage. However, the risk of these side effects are low – and several articles, including a study in the Indian Journal of Plastic Surgery, have reported no side effects at all.

Also, all of these side effects are localized to the scalp. Unlike some other hair loss treatments, like finasteride and dutasteride, PRP doesn’t cause systemic or sexual side effects.

PRP for hair loss: Is the price worth it?

PRP’s cost is fairly expensive compared to other hair loss treatments, with each session costing anything from a few hundred to over a thousand dollars. After the initial one-session-per-month period, maintenance treatments can be performed much less regularly – sometimes as infrequently as twice per year. But you’re still likely to be spending anything from $1,000 to $5,000 during your first year of treatment.

Keep in mind that PRP is less time consuming than other treatments. If your time is money, this might be the ideal treatment for you since the average PRP hair treatment time is under an hour. Just an hour of your time per month – plus transport to and from the clinic – certainly involves a lot less effort than other hair loss treatments.

The cost of PRP can be a hard pill to swallow, especially since FDA-approved treatments like minoxidil and finasteride cost an average of $30 per month. The good news is that many clinics offer package deals to reduce the overall cost. And if you find a good deal at an affordable clinic, you might even be able to spend the same amount on PRP as you would on cheaper FDA-approved treatments.

How’s that work, you might ask? Well, all hair loss treatments are long-term treatments. If you stop using them, you eventually start experiencing hair loss symptoms again. This means that you should consider not only how much you’re spending up-front, but long term.

This means that PRP can potentially be cheaper or the same cost as minoxidil and finasteride. But given the high up-front cost of PRP, you’ll only see savings after using this treatment for many years.

Finasteride, commonly known as Propecia®, is an oral pill for androgenic alopecia. According to StatPearls Publishing, it’s an FDA-approved medication that works as a dihydrotestosterone (DHT) blocker.

DHT is the main hormone involved in pattern hair loss. When it binds to hair follicles in excess, it causes them to shrink. This process, known as miniaturization, is what causes your hair follicles to produce thinner, weaker hairs.

When you take finasteride, you’re lowering levels of DHT and stopping the miniaturization process. As long as DHT levels stay reduced, your hair follicles will continue to produce thicker, stronger, hairs. Just one 1-milligram pill a day helps stop the progression of pattern hair loss.

Finasteride is very effective at stopping the progression of androgenic alopecia. But according to articles in BMJ and the Fertility and Sterility journal, it has a number of systemic side effects. These include unpleasant sexual side effects like impotence and erectile dysfunction.

Finasteride’s side effects usually go away when you stop taking the medication, but in a small percentage of men, they cause long-term issues. People with this condition, known as post-finasteride syndrome, also report additional issues including fatigue, breast tissue growth, insomnia, loss of libido, and mental health problems.

Compared to finasteride, PRP has no serious safety concerns. But if you’re not affected by finasteride’s side effects, the pill is cheap and convenient. And you don’t need to go into a clinic for a procedure. With finasteride, you could be done with your daily hair loss treatment before you’ve even gotten out of bed in the morning.

If you’re already using finasteride, you can still use PRP. The article in Medicina mentioned that using both of these together can improve hair growth. However, it doesn’t seem to be as effective as combining PRP with minoxidil.

Minoxidil, commonly known as Rogaine®, is a topical medication for androgenic alopecia. It’s FDA-approved as a serum and foam in two concentrations: 2 and 5 percent.

Minoxidil works as a vasodilator, increasing blood flow to the scalp. According to StatPearls Publishing, it’s also thought to promote the release of hair growth factors and activate enzymatic responses that promote hair growth.

Minoxidil needs to be applied each day – usually in the morning after brushing your teeth and in the evening, before bed. Like finasteride, it’s cheap, convenient, and effective.

Unlike finasteride, minoxidil’s side effects are pretty mild. In fact, they’re fairly similar to PRP’s. According to articles in the Journal of the American Academy of Dermatology and Recent Patents on Inflammation & Allergy Drug Discovery, common minoxidil side effects include:

​​Some minoxidil side effects, like a bit of redness or a brief stinging sensation, are not a major issue. You can often resolve these side effects by switching from serum to foam or trying out a different brand.

However, if you are experiencing extreme dandruff or dermatitis, you should consider switching to another hair loss treatment. Skin conditions like dermatitis have the potential to negatively affect your scalp’s skin and the hair follicles that live there. They have the potential to make hair loss symptoms worse and can speed up the progression of androgenic alopecia.

Minoxidil and PRP are both effective hair loss treatments. But some studies have found that minoxidil may be more effective than PRP in certain ways. For example, the Medicina article reported that PRP can improve hair thickness and density. However, minoxidil sometimes seems to produce better results in both aspects. More clinical trials are needed to understand which treatment is more effective, and in which respects.

If you’re already using minoxidil, you can also use PRP. The same Medicina article reported that minoxidil and PRP was better than finasteride and PRP at inducing hair regrowth. And a study in the Journal of Cosmetic Dermatology reported that when PRP is paired with 5 percent minoxidil solution, it enhances hair growth and hair density more than using minoxidil on its own.

That being said, this treatment is still pretty new. While most studies show that it’s safe, effective, and has few side effects, it’s not entirely clear how well PRP performs compared to other FDA-approved treatments, like minoxidil and finasteride. For the time being, it seems clear that PRP can be used with these treatments, and has the potential to produce better results than if either of them are used on their own. The main downside is PRP’s large up-front cost.

If you don’t think you can fork over thousands of dollars for PRP, consider trying minoxidil. It has a similar range of benefits and even has the potential to produce better hair regrowth results. But unlike PRP, it has a comparably low rate of serious side effects and a very low up-front cost.