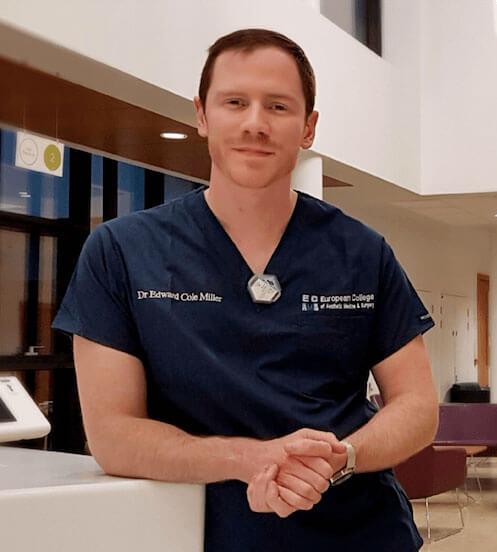 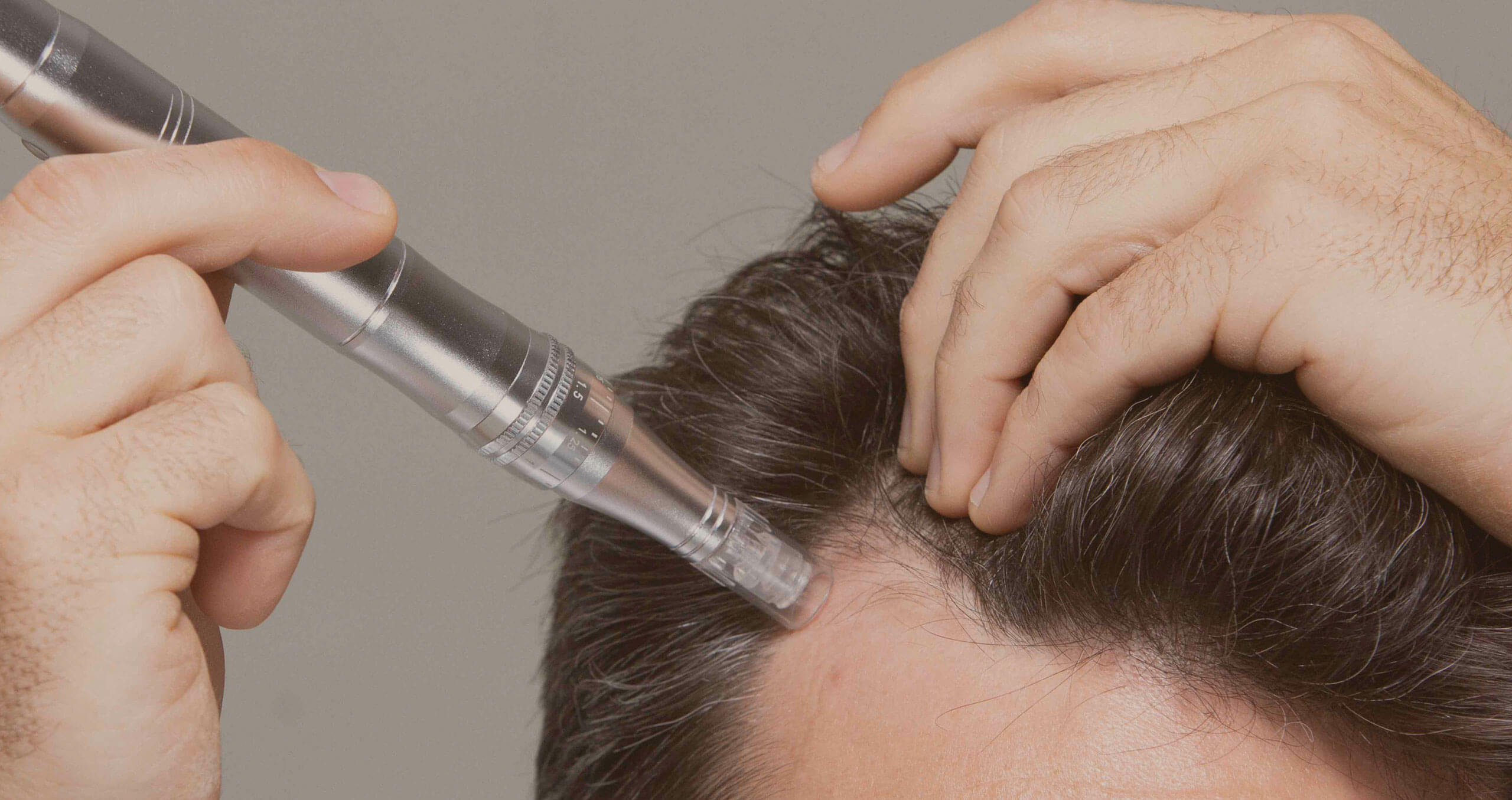 Microneedling has been used to reduce scarring, acne, stretch marks, and most recently, hair loss
Have you heard of acupuncture? This technique, which comes from Traditional Chinese Medicine, involves the insertion of very fine needles into specific areas of the body and is meant to help balance your body’s energy flow, which is known as qi. Certain types of acupuncture, like the seven-star technique, were even thought to help with hair loss. There’s little evidence to suggest that acupuncture can induce hair growth – but other similar techniques seem to help. Microneedling the scalp, for instance, has shown promise both on its own and as a combination therapy for hair loss.

Microneedling isn’t as scary as it might sound. While microneedling devices do involve many tiny needles, these needles are nothing like acupuncture needles or the ones used when you get an injection or donate blood. In fact, microneedling needles are generally so small you can’t even feel them – and in many cases, they don’t even fully pierce through your skin.

Microneedling devices were initially used for skin rejuvenation. However, a study in the Indian Dermatology Online Journal says that they are now used for various types of skin conditions, including scar reduction, acne, stretch marks, and excessive sweating. Microneedling for hair growth has also become increasingly common. However, this type of microneedling is still a fairly new treatment option, as is microneedling for drug delivery.

Medical microneedling devices generally have longer needle lengths. These longer needles allow the device to increase collagen production pathways in the skin, which can help reduce scarring. In some cases, they may penetrate deep into the skin.

These medical microneedling devices are meant to increase the skin’s permeability. They may also be used to stimulate stem cells to improve wound healing. Generally, clinics will offer treatment packages to customers, using the same device but swapping out sterile disposable needle packs each time.

Regardless of the type of device, microneedling products used for hair loss need to be applied to the scalp. Some devices require you to manually roll the microneedling device over your head, but others are motorized and smoothly move the device over your skin. Microneedling the hairline and other areas that are usually affected by hair loss, like the crown or temples, is the standard way of using these devices. 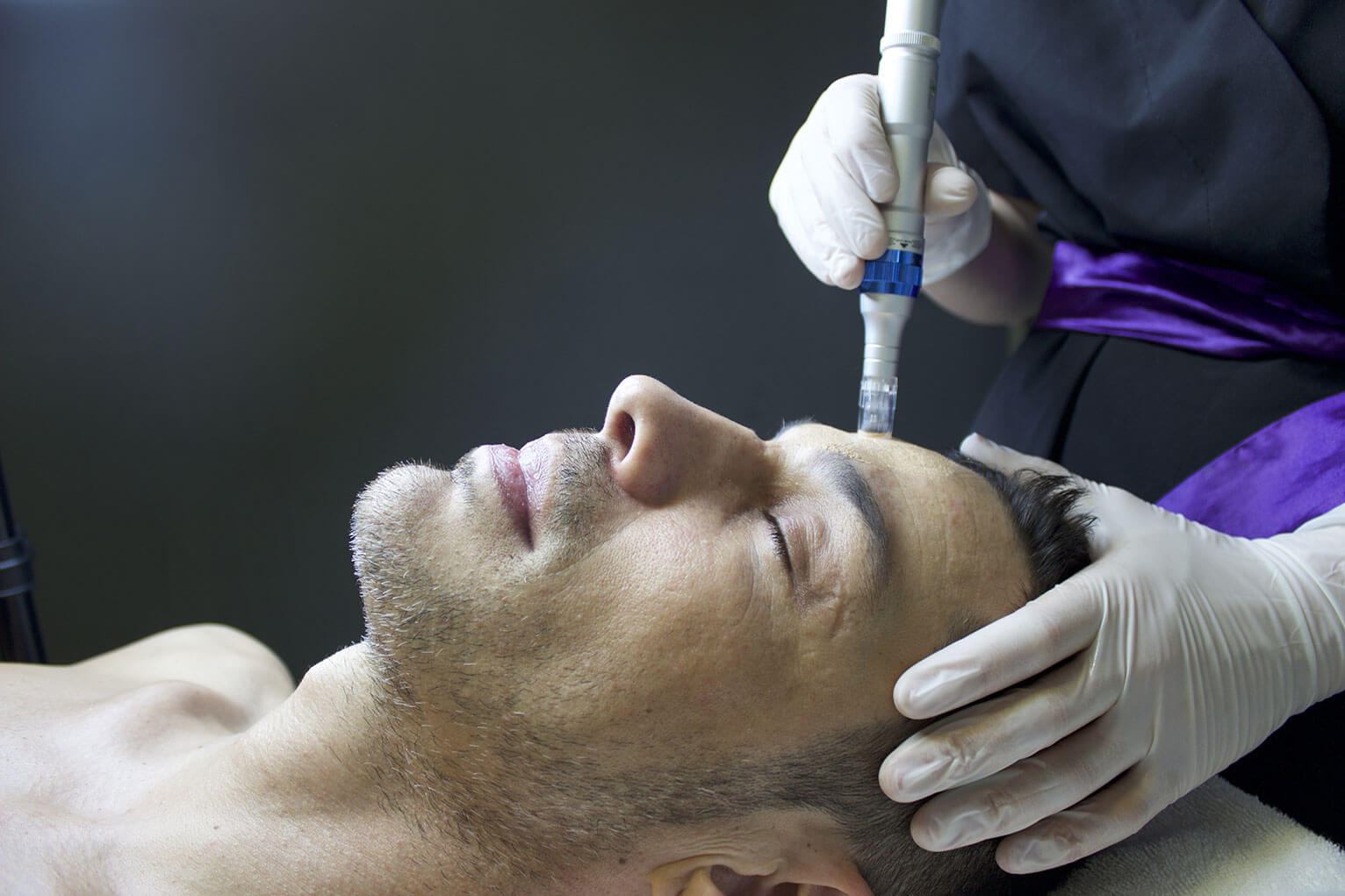 Microneedling can be done to various areas of the scalp, including the temples and hairline

Could microneedling work for me?

According to studies in the Journal of Cosmetic Dermatology and Indian Dermatology Online Journal, microneedling has been shown to work for:

Out of all of these types of hair loss, microneedling has been studied most extensively for people with androgenic alopecia.

According to a publication in the Indian Journal of Dermatology, microneedling is a great alternative for people with pattern baldness who did not respond to popular FDA-approved hair loss treatments, like finasteride or minoxidil. A recent study in the Journal of Cosmetic and Laser Therapy even found that microneedling was able to produce more improvement in hair growth than minoxidil.

If you’re already trying different treatments for hair loss, talk to your doctor or dermatologist about microneedling. Home-use microneedling devices have been reported to improve hair growth in people that are already taking hair loss treatments, like minoxidil.

Microneedling might be a new treatment option for hair loss, but it’s very promising. People who don’t respond well to the standard FDA-recommended treatments, like minoxidil and finasteride, should talk to their doctor about microneedling as an alternative treatment option.

If a standard treatment, like minoxidil, is working for you, it may still be worth talking to your doctor. Home-use microneedling devices may be able to improve hair growth for people who are already taking hair loss medicines.