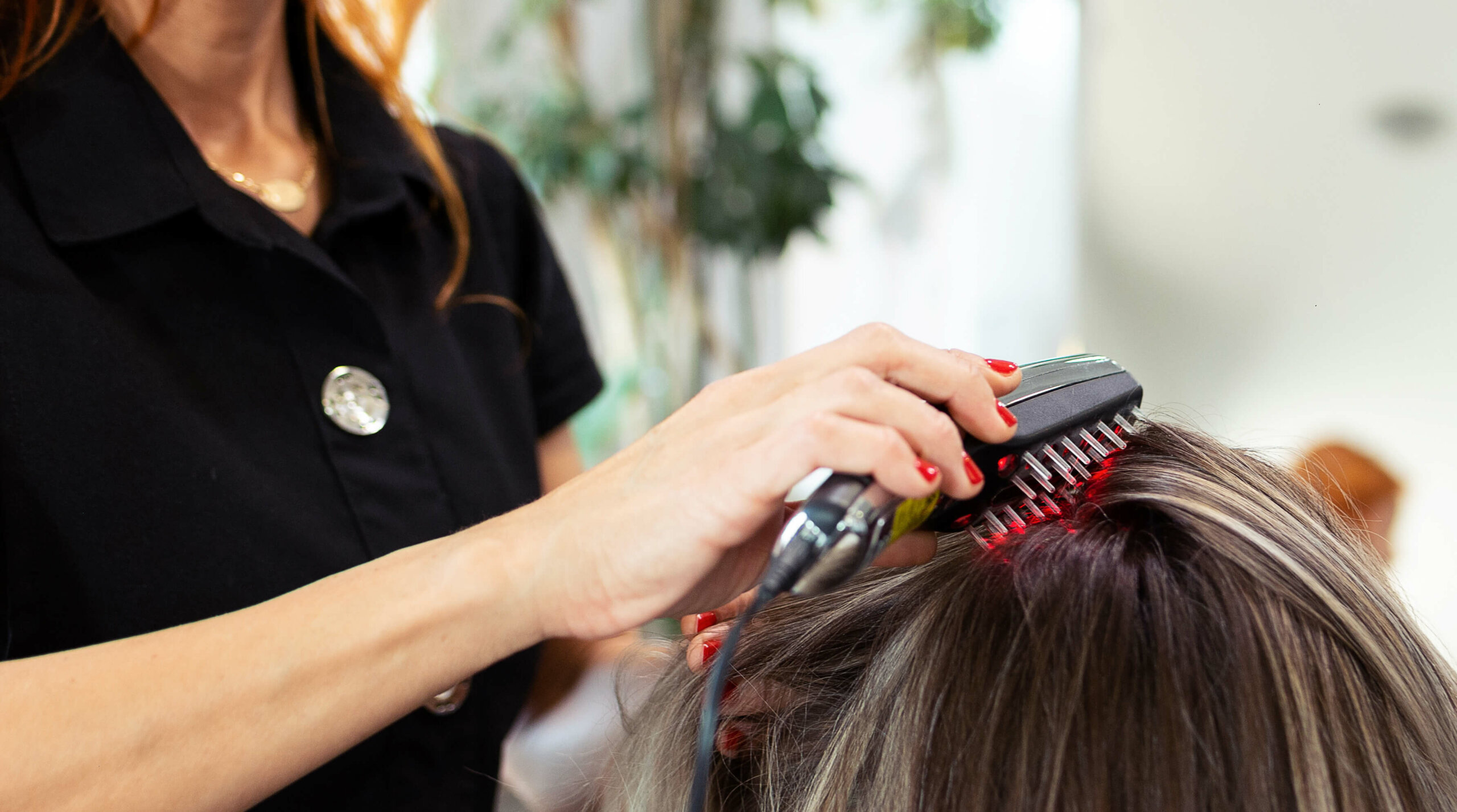 Laser combs and brushes are easy to use and can be more affordable than hands-free LLLT devices.

Laser combs are a type of device used to administer low level laser therapy (also commonly referred to as low level light therapy or LLLT). These devices are used to treat several forms of hair loss and are FDA-cleared for the treatment of androgenic alopecia.

Unlike laser caps or hoods, which are hands free and essentially just rest on your head, you have to brush LLLT combs through your hair to apply your treatment. People generally need no more than 10 to 15 minutes of low level laser therapy treatment each day. This is the equivalent of about an hour per week.

What is a laser comb?

Laser hair combs are biostimulatory light therapy devices. The light in LLLT devices is emitted at a specific wavelength (usually between 650 and 900 nm) that’s thought to be beneficial to skin and hair follicles.

Laser combs were actually the first type of low level laser therapy device to be approved by the US Food and Drug Administration for the treatment of androgenic alopecia. The first FDA-approved LLLT comb was the HairMax® laser comb. According to a review article in the Dermatology Online Journal, this device was approved for men with androgenic alopecia (male pattern hair loss) in 2007.

Studies like this review have reported that LLLT devices can help counteract hair loss and promote hair regrowth in people with androgenic alopecia and alopecia areata. However, LLLT devices like laser combs are still only approved for the treatment of pattern hair loss.

Are there other types of LLLT devices?

Since the approval of laser combs in 2007, a variety of other LLLT devices have been developed and FDA-cleared, too. These include products like laser caps, brushes, hoods, helmets, and headbands.

While there are only about half a dozen types of devices, there are several dozen FDA-cleared versions you can now choose from and purchase. These devices can have many but not all of the same characteristics. Some may have minor differences (like something as simple as their brand name) or major differences, like the power at which they operate.

LLLT is the new kid on the block. It’s only been approved as a hair regrowth solution fairly recently — at least when compared to the other FDA-approved options, minoxidil and finasteride. However, the technology used in LLLT devices has been around for quite a while. According to the review in the Dermatology Online Journal, low level lasers were first discovered to induce hair growth in 1967.

Since then, LLLT has been used to treat a myriad of different conditions. According to a study in the Seminars in Cutaneous Medicine and Surgery Journal, these treatments can help:

When LLLT is used to treat other health issues like these, it is integrated into an even wider variety of devices. However, unlike laser combs, caps and headbands, which are available for home use, most of these other LLLT devices are medical-grade and only found in clinics.

How does a laser comb regrow hair?

LLLT devices like laser combs can regrow hair and improve hair quality in people with androgenic alopecia. Although it’s certain that LLLT has a positive effect, scientists still aren’t completely sure about the exact way that LLLT works.

According to reviews published in the Skin Appendage Disorders, Lasers in Medical Science and Lasers in Surgical Medicine journals, LLLT might support hair regrowth by:

Laser combs and other LLLT devices have been shown to improve hair growth, increase hair count, and promote better overall hair coverage. These are the same sorts of improvements you could expect after using other FDA-approved treatments, like minoxidil and finasteride… So yeah, laser combs certainly do work!

How long do laser combs take to work?

Most hair loss treatments take around 3 months to start improving hair quality and promoting hair regrowth. This is because it takes this amount of time to stimulate hair follicles and the hair growth cycle.

Laser combs are essentially the same to any other hair loss treatment in this way. You can expect to see noticeable improvements from low level laser therapy treatments after around 3 to 4 months.

With every effective treatment comes side effects. Fortunately, LLLT-induced adverse events are pretty rare as these light therapy devices are very safe.

When side effects are reported, like in the Skin Appendage Disorders study, they seem easily resolvable and mild. The issues reported in this study include skin problems like:

Overall, laser comb reviews are usually quite positive. Plus, all of the randomized clinical trials that were assessed in this study were able to produce improvements for people with androgenic alopecia.

There aren’t many studies comparing LLLT’s effectiveness as a hair regrowth treatment to other FDA-approved treatments. However, a recent study in the Bulletin of Physical Therapy compared daily 1 milligram doses of finasteride to daily 15 minutes sessions with the  LLLT comb. This study found both treatments to be equally effective in regrowing hair in people with androgenic alopecia.

Finasteride is well known for causing unpleasant side effects (particularly side effects of a sexual nature), while LLLT treatments cause minor problems or none at all. Since both treatments seem to produce roughly similar results, the lack of side effects might make laser combs a much more appealing option to many men.

Currently, the FDA doesn’t recommend using two or more treatments simultaneously — even the already approved options. However, a second Lasers in Medical Science article reported that LLLT and finasteride can be combined safely.

The Skin Appendage Disorders review also mentioned that LLLT has been safely combined with minoxidil. But there doesn’t seem to be any information on combining laser combs and minoxidil. So far, there have only been studies combining minoxidil with laser helmets.

Is LLLT the right treatment for me?

Like other hair loss treatments, LLLT is most likely to work well for people with mild to moderate hair loss. If you’ve allowed your alopecia to progress past a certain stage, you might want to invest in a more intensive treatment, like a hair transplant, instead of a laser comb. Surgeries like follicular unit extraction and follicular unit transplantation tend to be better options for people with late-stage pattern hair loss.

Laser combs and other LLLT devices can range in price from a hundred to several thousand dollars. This is probably the biggest difference between this hair loss treatment and the minoxidil and finasteride.

The high up-front cost of LLLT devices is one of the treatment’s biggest downsides. Plus, the average laser comb price can vary wildly, based on factors like:

Despite the hefty up-front cost, keep in mind that many light therapy tools — particularly the expensive ones — have fairly long guarantees and warranties. This makes LLLT devices very different from non-refundable over the counter drugs like minoxidil and prescription-only products like finasteride. And since minoxidil and finasteride have to be purchased repeatedly, this can potentially make tools like laser combs more economical in the long run.

Where can I buy a laser comb?

You can buy a laser comb almost anywhere online these days, from Amazon to directly with a product manufacturer (like HairMax®). Given the costs of these devices, it can often be better to buy directly from a vendor. That way you know you’re not buying a cheap knock off. And, if there are any issues, they’ll be more likely to honor your device’s warranty.

Choosing a laser comb for home use

If you’re new to using a laser comb or have switched to a laser comb from a different LLLT device, keep in mind that LLLT devices aren’t all the same. For instance, the laser frequency of a comb can vary. And this isn’t just between different devices, like combs and caps. You can also find a huge amount of variation between models of LLLT combs, even when they’re made by the same brand or manufacturer.

While this might seem strange for an FDA-cleared treatment, the Springer publication Minimally Invasive Aesthetic Procedures says that all LLLT devices are different. This means that each one can have a different recommendation on the amount of sessions you should administer per week, the duration of those sessions, and how long you should wait between treatments.

Always try and look at the individual device specifications and their recommended treatment protocols before making a purchase. If you see that your LLLT device is recommending many hours of use per week or has a wavelength well outside of the 650 to 900 nm range, you may want to consider purchasing a different device.

How to use a laser comb at home

Unlike minoxidil, which needs to be applied twice a day, and finasteride, which needs to be taken daily, LLLT treatments can often be done much more irregularly. The exact recommended treatment will vary based on the device you’ve purchased. However, most studies report applying light therapy to people’s heads every other day or, in some cases, as little as three times per week.

If you’re applying low level light therapy with a laser comb, you’re likely brushing your hair with this device for between 45 and 105 minutes each week. If you don’t feel like performing such a repetitive arm movement at home, you can also go into a clinic to receive treatments. Just be aware that a third article from the Lasers in Medical Science journal reported that they found LLLT to be most effective when used for less than 60 minutes per week.

Although it might sound a bit sci-fi to use lasers to improve your health, it’s perfectly sensible to use a laser comb for hair loss. The FDA approved this light therapy device back in 2007, and there have been many studies proving LLLT’s efficacy since then.

These days, there are a wide variety of LLLT devices for hair loss — not just the original laser combs. If you don’t like the idea of a handheld device, you can opt for a helmet, cap, or hood-type LLLT device, instead.

And of course, like any treatment, LLLT won’t work for everyone. If you invest in a device and find it’s not right for you, consider an alternative FDA-approved treatment, like minoxidil or finasteride.