What is a laser cap for hair loss (and should I buy one)? 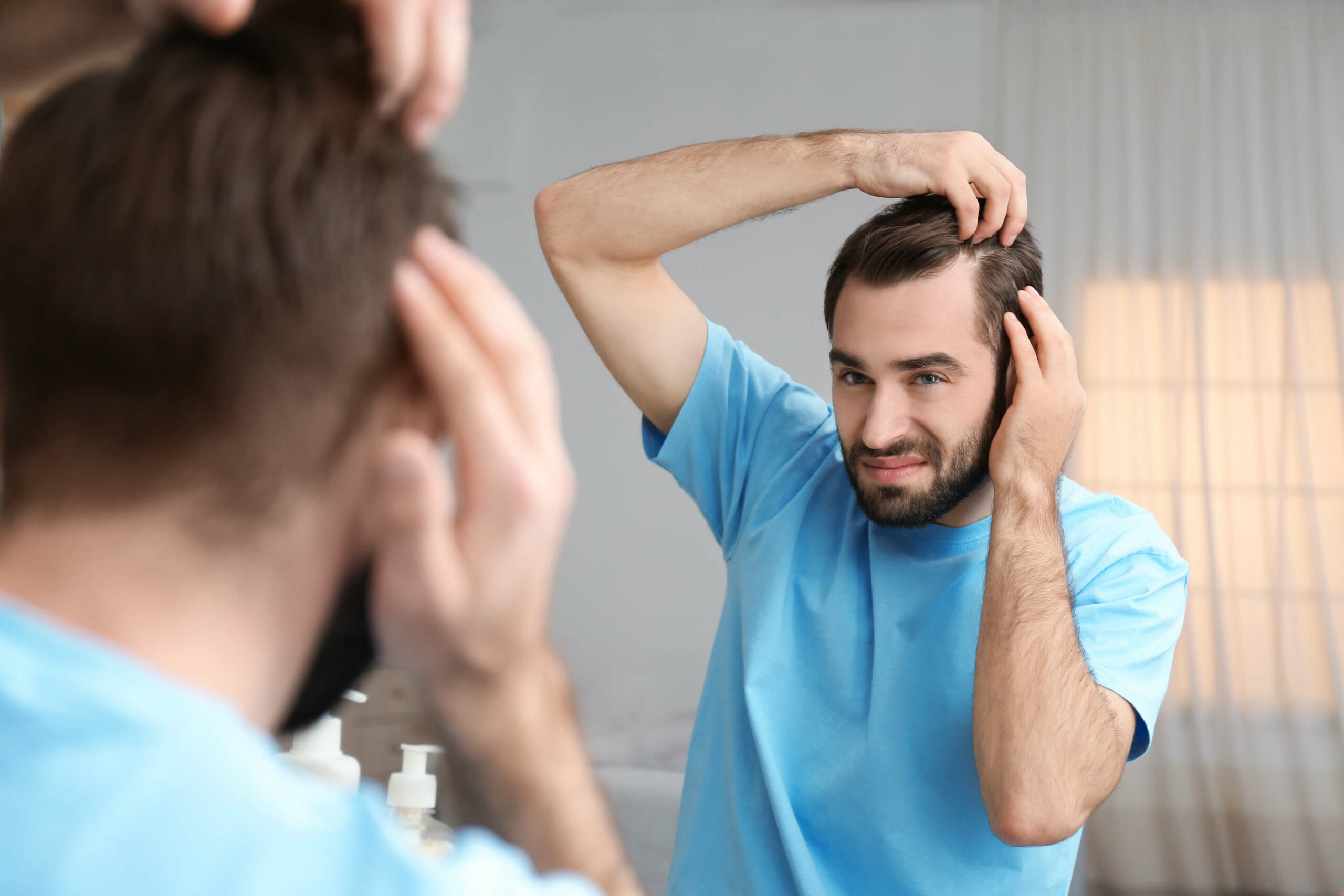 Laser caps are a type of low level laser therapy (LLLT) device with lights, like LEDs. They’re placed on your head for short periods of time in order to deliver light therapy to your scalp. LLLT devices like these are used to help people with androgenic alopecia regrow hair.

Lasers on TV are often depicted as burning hot lights, able to pierce through walls and shatter windows. But laser caps and other LLLT devices use cold lasers — so you don’t need to worry about them hurting you or boring a hole in your head.  These lasers are known as cold or ‘low level’ lasers because they emit light with a wavelength that ranges between 650-900 nm.

The most common type of hair loss, androgenic alopecia, has several treatment options. If you’ve been looking into hair loss treatments, you’ve probably heard of the two most popular options: minoxidil, a topical solution, and finasteride, an oral medication. Both of these drugs, which have been around for a few decades now, are FDA-approved ways of treating male pattern hair loss.

Lasers have been used in medicine for a while now. And cold lasers, like those used in low level laser therapy, have been known for their biomodulatory effects for over half a century. But it’s only fairly recently that LLLT was developed for androgenic alopecia. According to an article in Lasers in Medical Science, the first low level laser device for men with androgenic alopecia (male pattern hair loss) was cleared by the FDA in 2007.

The laser cap is often also referred to as a laser hat or laser helmet. It’s one of three main low-level laser therapy (LLLT) devices used for hair loss.

According to a clinical trial published in the Lasers in Medical Science journal, there are three major types of LLLT devices: hoods, brush-based tools (which include combs, brushes, and headbands), and hat-like systems (like helmets and caps). All of these LLLT devices use light with a wavelength that ranges between 650-900 nm, but the exact light source, type, and wavelength can vary substantially.

LLLT devices are actually pretty non-standardized. A meta-analysis published in the Lasers in Medical Science journal reported that they sometimes even use a combination of different types of laser lights that may have the capacity to emit at multiple wavelengths. Interestingly, while most LLLT devices use lasers with wavelengths between 630 and 660 nm, this meta analysis reported that dual wavelength devices were also commonly used in clinical trials.

According to a review in the Dermatology Online Journal, low level lasers have been inducing hair growth since the mid-1960s, not too long after the first laser was created. However, it wasn’t until 2007 that the first LLLT device, the HairMax® Laser Comb, was given FDA clearance for men with androgenic alopecia.

Initially, the first LLLT studies were shown to help improve hair texture, quality, and terminal hair growth. These are the long, dark hairs on your head — rather than the peach fuzz, known as vellus hair, found on your face and body. Since then, a review in the Skin Appendage Disorders found that this treatment can also improve hair growth, density, and the quantity of terminal hairs.

Like minoxidil or finasteride, LLLT takes a while to produce results. Most LLLT trials are conducted over about 4 to 6 months. Noticeable positive improvements in hair growth are typically reported after about 16 weeks of treatment.

There aren’t many studies comparing LLLT to the other FDA-approved options, minoxidil and finasteride. But one study mentioned in the Skin Appendage Disorders review found that LLLT produced slightly better results than 5 percent minoxidil.

However, the real winner in this study was the combined therapy. People who used 5 percent minoxidil twice a day and a laser helmet on every other day had the best hair regrowth results.

If you’re thinking about buying an LLLT cap, there are currently no contraindications against you using it with an FDA-approved treatment like minoxidil and finasteride. A combination treatment might help you achieve better results than either option on its own. That being said, you should know this combination isn’t yet FDA-recommended as a treatment option.

Are some LLLT devices better than others?

LLLT devices are made by different manufacturers, have different types and amounts of lights, and various other variables. So it’s totally possible for some LLLT devices to be better than others.

LLLT clinical trials generally have quite positive results. However, this type of variation can make it different to replicate hair growth results across studies. But if you’re just comparing device shapes, no studies say that laser caps are better than brushes or headbands… at least, not yet.

The meta-analysis published in the Lasers in Medical Science journal found that both laser cap and comb devices were effective in combating androgenic alopecia. Both types of devices were equally able to increase hair density, and could be used as short and long-term treatments.

Pros and Cons of LLLT

If you’re considering LLLT treatments, chances are that you’re comparing them against the other FDA-approved options. LLLT, minoxidil, and finasteride are all very different ways of counteracting androgenic alopecia.

If you’re seriously considering laser hair growth treatments with LLLT, you’ve picked a good time to check out this treatment. A decade or two ago, there were only a handful of devices available for home use, and LLLT was mainly available at expensive hair loss treatment clinics. According to the 2020 review in the Skin Appendage Disorders journal, there are currently around 30 FDA-cleared LLLT devices for androgenic alopecia.

Low level laser therapy devices are convenient, non-invasive, and easy to use. But the one thing they are not is affordable — at least, not when it comes to the initial price tag. LLLT devices are known for costing anywhere between hundreds to thousands of dollars. Some of these devices cost as much as a hair transplant surgery!

You might think that shelling out more for an LLLT device may benefit your wallet in the long run. Honestly, this really comes down to the cost of the device. Minoxidil, for example, has an average cost of $0.50 cents per dose. If your laser cap costs $1,000, that’s the equivalent of 2,000 doses of minoxidil: the amount you’d use over 33 months (almost 3 years).

The final cost of an LLLT device is usually based on the amount of lights that it contains. Generally, the more lights a device has on it, the more it will cost. And obviously a tool like a laser cap has many more lights than a laser comb or headband. This tends to typically make certain LLLT products pricier than others.

On the upside, the increasing amount of LLLT devices in the market is finally bringing prices down. Another plus? Despite a high up-front cost, you’ll never have to worry about running out of your treatment, like you would with a medication.

Unlike minoxidil , which needs to be applied every morning and evening, and finasteride, which needs to be taken once a day, low level laser therapy can be done somewhat irregularly. Most studies have treatments just three times per week or every other day, though others have gone for shorter, daily sessions.

These long breaks between treatments can be particularly convenient for people who are very busy, aren’t that good at sticking to a daily routine, or travel regularly for work (and would consequently struggle to take a LLLT device around with them). That being said, according to the text Minimally Invasive Aesthetic Procedures, the treatment interval can vary since it’s dependent on the device and its preset protocols.

“Each machine has its predefined protocols for the number of ideal sessions to be performed and for the interval between them.“

With LLLT, less is more

Another one of the most convenient aspects of low level laser therapy is that it doesn’t need to be done for long periods of time to be effective. In fact, a meta-analysis published in the Lasers in Medical Science journal reported that LLLT is more effective when used for less than 60 minutes per week.

Using a laser comb or headband might sound like a lot of effort — a bit like some people perceive minoxidil and its daily applications. But laser caps and helmets are both hands-free, making them just as convenient as popping a finasteride pill.

LLLT devices might be new, but they really work

LLLT caps and other devices are fairly new to the hair loss treatment market, but seem to have a lot of promise. So far, LLLT is effective as a therapy for androgenic alopecia. That being said, very few studies have compared it to the two FDA-approved hair loss drugs, minoxidil and finasteride.

The biggest downside to LLLT is cost, with some products as expensive as hair loss surgeries. However, each year, an increasing number of LLLT devices are FDA-cleared. As prices come down for laser caps and other devices, they’ll become an increasingly interesting and accessible option for the treatment of pattern hair loss.