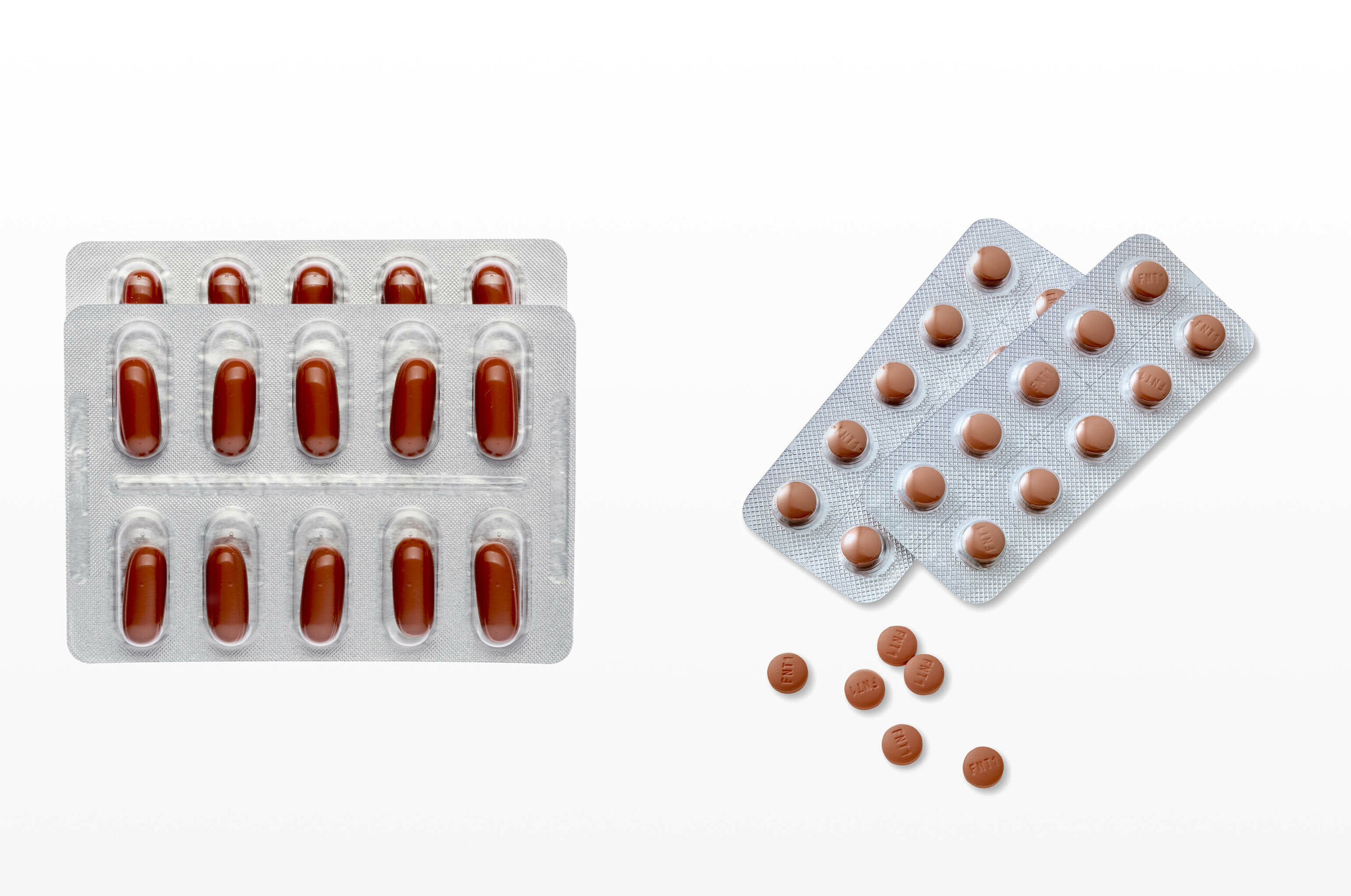 Although these medications look somewhat similar, dutasteride is much stronger than finasteride.

Finasteride, which is commonly known as Propecia®, and dutasteride, also known as Avodart™, are both oral medications used for the treatment of pattern hair loss and benign prostatic hyperplasia. Although these pills work in similar ways and are used to treat the same conditions, there are also very important differences between them.

Finasteride is available as a generic medication, but you might be more familiar with it by the brand name Propecia®. People who take finasteride to prevent balding need a dose of just one 1 milligram a day.

Although it’s not yet readily available or FDA-approved, topical finasteride is becoming a particularly popular alternative to oral finasteride. A review in the Journal of Drugs in Dermatology reported that the topical solution seems to be just as effective as oral finasteride, but produces less side effects.

Dutasteride: A stronger alternative to finasteride

Dutasteride is commonly known as Avodart™, though it goes by a variety of other names when combined with other medications in the same capsule or pill. Like finasteride, dutasteride has also been around since the 1990s. But according to a report from the Japanese Pharmaceuticals and Medical Devices Agency, it was only approved for the treatment of BPH in 2001.

Dutasteride still isn’t approved for the treatment of androgenic alopecia in the USA, but it now is in both Japan and South Korea. As a stronger drug, dutasteride is given at much lower doses to finasteride. The Japanese Pharmaceuticals and Medical Devices Agency report states that the usual dose is just 0.1 milligrams of dutasteride per day, though this amount can be increased to 0.5 milligrams as needed.

Dutasteride lotions or other topical solutions haven’t been clinically tested much compared to finasteride. However, articles in the Journal of the European Academy of Dermatology and Venereology and ACTAS Dermo-Sifiliográficas discussed the success of dutasteride microinjections done directly onto the scalp.

Although there have only been a handful of these studies so far, they show how weekly or even monthly injections of low doses of dutasteride can help improve hair growth. And like topical finasteride, localized microinjections of dutasteride also seem to produce fewer and milder side effects.

Dutasteride and finasteride are both hormone blockers known as DHT (dihydrotestosterone) blockers. Although it’s perfectly normal and safe to have DHT in your body, this androgen has been associated with both balding and prostate issues. Blocking DHT is consequently what makes both finasteride and dutasteride work as treatments against androgenic alopecia and BPH.

DHT is considered to be the primary hormone involved in androgenic alopecia. When it binds to hair follicles, it causes gradual and progressive hair loss. Lowering levels or preventing this androgen from binding to follicles can help stop balding and prevent this condition’s progression.

DHT blockers do exactly what their name implies. But finasteride and dutasteride accomplish this in two slightly different ways. In fact, this is the main difference between these two medications.

According to a study in the Skin Appendage Disorders journal, DHT is primarily produced from testosterone via the 5-alpha reductase (5-αR) enzyme family. Most (though not all) DHT blockers work by targeting part of the 5-αR enzyme family.

There are three members of the 5-αR family: Types I, II, and III. All three of these are known as isoenzymes and are found in different regions of the body. Type I, for example, is mainly present in hair follicles and skin, while Type II is mainly found in men’s genitalia, including their prostate. Type I and II are thought to be the main isoenzymes involved in conditions like BPH and pattern hair loss.

Finasteride blocks DHT by primarily targeting the Type II isoenzyme of the 5-αR family. Dutasteride, on the other hand, is able to target all three isoenzymes. While finasteride is able to block about 70 percent of DHT serum levels, dutasteride blocks around 90 percent, making it a much more potent DHT blocker.

It’s now fairly well established that dutasteride is a stronger DHT blocker than finasteride. Despite this, the FDA hasn’t shown any signs that it might approve the stronger medication as a treatment for androgenic alopecia.

Is dutasteride better than finasteride?

Dutasteride has a longer half-life

Not only is dutasteride more potent and effective as a DHT blocker, but the oral medication also has a long half-life that lasts about 4 to 5 weeks. This means that once you take dutasteride, it stays in your body for quite a while and takes a long time for your body to excrete.

Although this might not seem like a positive, it actually means that dutasteride could be a much more convenient hair loss treatment than finasteride. Finasteride has a fairly short half-life of just 6-8 hours and needs to be taken once a day. With such a long half-life, dutasteride could be taken much more infrequently and potentially still be effective, making it an ideal hair loss treatment for the busy or forgetful man.

“A patient who forgets to take his dutasteride is not going to experience DHT rebound, like a patient who misses doses of finasteride. This raises the possibility that a new formulation of the drug could be developed, one that required, for example, only weekly dosing.“

Leonard Marks, MD, Associate Professor of Urology at UCLA and Medical Director of the Urological Sciences Research Foundation, as published in the , Urology Times.

Dutasteride works even when finasteride doesn’t

Finasteride doesn’t work well for everyone, and that’s to be expected. No medication is 100% effective, after all.

Since dutasteride and finasteride both work as DHT blockers, you might think that if one doesn’t work, the other wouldn’t, either. But this isn’t always the case. A study in the International Journal of Dermatology reported that more than 77 percent of participants — all men who hadn’t responded to finasteride treatment over a 6 month period — saw hair regrowth after taking dutasteride.

If you feel like finasteride isn’t working for you, switching from finasteride to dutasteride is certainly an option. However, unless you’re in South Korea or Japan, dutasteride would likely need to be prescribed by your doctor for off-label use as a hair loss treatment.

Dutasteride is stronger, yet usually has no worse side effects

Often, when you take a stronger drug, you’re also more likely to end up with an increased amount of side effects. Yet when comparing oral dutasteride with oral finasteride, the meta-analysis in Clinical Interventions in Aging found that the types of side effects produced by these two drugs were roughly the same. The rates of these side effects were also similar between finasteride and dutasteride.

Finasteride has been studied more extensively

Dutasteride is definitely a promising and effective hair loss treatment for androgenic alopecia. Just keep in mind that it hasn’t been studied as much as finasteride, or in as many formulations. Additionally, few studies directly look at finasteride and dutasteride as hair loss treatments, which means more comparative research on these two drugs is needed.

Finasteride vs. dutasteride side effects

Finasteride and dutasteride are both considered to be safe medications. However, both of them produce side effects. The exact side effects differ based on the formulation and way you’re taking the medication.

Oral finasteride and oral dutasteride’s side effects are fairly similar. These side effects are generally sexual in nature and, according to the Journal of Clinical and Aesthetic Dermatology, include issues like erectile dysfunction, decreased libido, and ejaculation disturbances. Between three and 16 percent of people seem to experience these side effects.

Oral finasteride is infamous for it’s side effects — many of which are sexual in nature. Generally, three main types of side effects are discussed: changes in libido, erectile dysfunction, and issues ejaculating. Interestingly, these side effects often tend to go away for people who take this medication long-term.

A small percentage of people also seem to report more severe symptoms. These severe side effects are generally grouped together and referred to as post-finasteride syndrome.

While these side effects likely sound quite severe, it’s important to recognize that post-finasteride syndrome only affects a small number of users. The Post Finasteride Syndrome Foundation estimates that around 1 percent of people who take finasteride may experience these symptoms. Younger users seem to be at a higher risk of developing this condition.

Does dutasteride have more side effects than finasteride?

According to the article in the Journal of Clinical and Aesthetic Dermatology, dutasteride’s side effects are generally considered to be the same as finasteride’s. However, a handful of studies, including the previously mentioned  study in the International Journal of Dermatology, have reported a higher rate of sexual side effects. And like with finasteride, higher doses increase the risk of these unpleasant side effects.

Despite its name, post-finasteride syndrome can also occur to dutasteride users. In fact, the Post Finasteride Syndrome Foundation says that these side effects can affect anyone taking these types of DHT blockers.

If you already take finasteride and it gives you side effects, chances are that you’ll experience the same issues when taking dutasteride. If you’re keen to avoid such side effects, you may want to switch to a different type of hair loss drug, like minoxidil, which works by increasing blood flow to the scalp. Like any other drug, minoxidil has side effects, but none of them are sexual.

Topical dutasteride vs. finasteride side effects

Can I take finasteride and dutasteride together?

It might not be wise to take finasteride and dutasteride together due to an increased risk of side effects. That being said, there have been a few reports, like this case study in the Australasian Journal of Dermatology, that show how these medications can be combined without causing any issues. And in this particular case, the person taking finasteride and dutasteride saw a dramatic increase in hair regrowth within the first 3 months of treatment.

Finasteride and dutasteride are also sometimes incorporated into different formulations, like topical solutions, and used as part of off-label combination treatments. The review in the Journal of Drugs in Dermatology reported a particularly successful case in which both of these DHT blockers were combined in topical format with another FDA-approved hair loss treatment, minoxidil, to create a product called NuH hair. This combination treatment was able to produce hair regrowth within 3 months without any side effects.

Notably, when the topical dutasteride, minoxidil, and finasteride (NuH hair) solution was used with ketoconazole shampoo and both the regular FDA-approved versions of minoxidil and finasteride, hair regrowth was achieved in as little as 30 days. This is particularly interesting since the vast majority of medications and combination treatments take 2 to 3 months to produce any positive changes in hair growth.