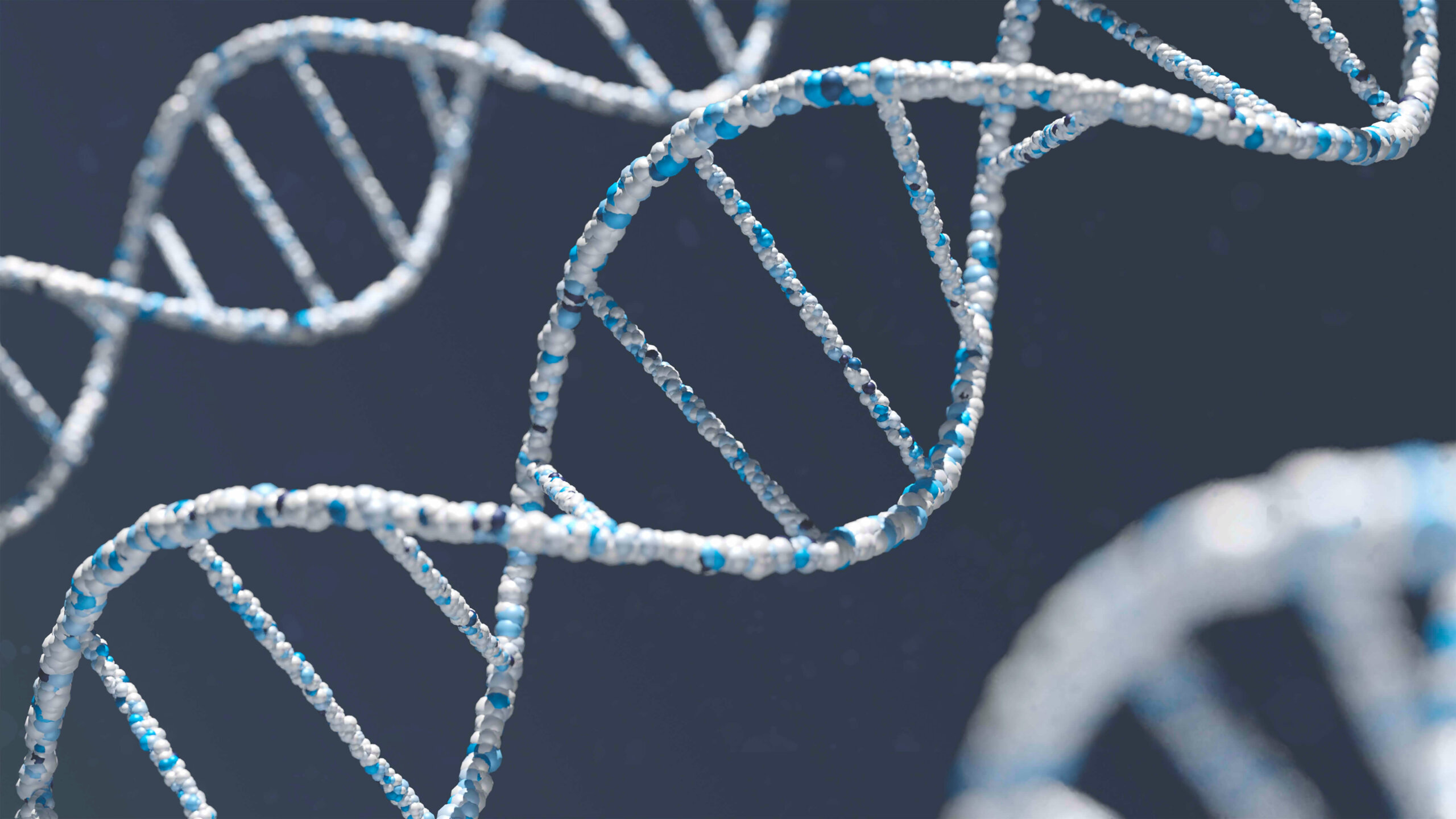 Hundreds of genetic loci have been linked to male pattern hair loss.

Hair loss can be caused by a myriad of different factors, from immune system issues to an increase in certain hormones. The most common cause of baldness is due to a condition called androgenetic alopecia (also known as male pattern hair loss). As its name implies, there is a genetic component to this progressive form of hair loss.

That being said, there’s no single male baldness gene culpable for pattern hair loss. And a number of different factors, including your hormones, racial background, and the foods you eat, can play a role in how quickly hair loss symptoms progress to baldness. So if you were hoping you could just blame your mom or dad for your hair loss, you probably can’t!

A study in Clinical and Experimental Dermatology says that androgenic alopecia is a  multifactorial disorder. When it starts and its progression are due to interactions between your environment and different genes.

Hundreds of genetic loci (where genes can be found on chromosomes) have been linked to androgenic alopecia. But even now, the genetic component behind this progressive form of hair loss is poorly understood.

Most studies consider the main gene behind androgenic alopecia to be the androgen receptor (AR) gene. The AR gene, which is located on q11–q12 on the human X chromosome, is thought to play a role in regulating androgen hormones and their interactions with hair follicles.

Hair follicle miniaturization usually progresses in a defined pattern. You usually see hairline changes, like a receding hairline and thinning hair around the temples, as the first signs of androgenic alopecia. According to a Dermatologic Clinics study, this is followed by other common symptoms, like temple hair loss, thinning hair at the top of the head, and hair loss at the crown.

If left untreated, men will eventually go bald – but only at the top of their heads. There’s usually a thin strip of hair left along the sides of the head (by the ears), and along the back of the scalp.

Male pattern hair loss is often referred to as a condition that’s caused by genetics and hormones. But there are quite a few other risk factors that may increase your likelihood of developing this condition. And your genetic predisposition to going bald may determine how much of a role these additional factors play.

In contrast, people with less of a genetic predisposition to male pattern baldness still had hair loss that was caused by their genes, but was more strongly influenced by other factors, including:

These differences highlight that the impact DHT levels have on the progression of androgenic alopecia may vary from person to person. But they also show that other aspects of daily life, like your diet and sun exposure, may also influence pattern hair loss.

Where does the bald gene come from?

Honestly, no one really knows the origin of the bald gene – or more accurately, since androgenic alopecia is considered polygenic, ‘bald genes’. But a study in the Medical Hypotheses journal proposed that it might actually be a protective mechanism that developed in order to reduce the risk of prostate cancer.

This might sound strange, but this theory is based on vitamin D and the way the human body absorbs this nutrient from ultraviolet light. Sun exposure – and consequently higher levels of vitamin D – are thought to potentially reduce the risk of advanced prostate cancer, while low levels increase your risk of other diseases, including rickets and heart problems.

But most caucasian individuals – who are the people at most risk of developing male pattern baldness – historically lived in high latitude areas and consequently had relatively little sun exposure. If you were a farmer in one of these relatively cold countries, this meant that you were likely wearing long sleeves and trousers, and the only exposed area of your body was your face, head, and hands.

The easiest way to increase sun exposure is consequently via the head – particularly a head that’s not covered by hair. Hair loss meant that this essential nutrient could be easily absorbed by balding people’s exposed scalp, even in places where sunlight is limited.

Male pattern hair loss is known to be inherited, with heredity linked to about 80 percent of cases. But your racial background also plays a huge role in whether or not you’ll go bald and at what point you’ll start seeing symptoms.

According to the National Center for Biotechnology Information publication Endotext, 50 percent of people with caucasian ancestry are affected by pattern hair loss. This progressive form of hair loss is also thought to be most severe in white men, affecting them at an earlier age and causing more substantial hair loss symptoms.

How to tell if baldness is in your genes

Male pattern baldness is largely seen as a complex condition since it’s polygenetic. But despite this, there are genetic tests that can test for this condition.

According to a study in the International Journal of Molecular Biology: Open Access, the most accurate way to tell if pattern baldness is in your genes is to look at the AR gene. Molecular genetic tests will look for mutations on this gene to determine your likelihood of going bald.

The FDA has approved three treatments for androgenic alopecia. These treatments, which can help stop the progression of pattern hair loss and promote hair regrowth, are most effective for people with mild to moderate hair loss. People with more advanced hair loss can use these treatments, but may also need to consider another option, like a hair transplant.

Minoxidil was the first hair loss treatment to ever be approved by the FDA. This topical treatment works as a vasodilator, increasing blood flow to the scalp. Minoxidil is currently sold as a liquid and foam in concentrations of 2 and 5 percent. Minoxidil 5 percent is thought to be the most effective solution.

Low-level laser therapy, commonly known as laser hair therapy or LLLT, is a light therapy treatment for androgenic alopecia. This hair loss treatment is pretty new, and according to an article published in the Dermatology Online Journal, was given FDA clearance in 2007. LLLT uses a variety of different tools, including combs, brushes, caps, headbands, and hoods, to deliver biostimulatory light therapy to the scalp. You can buy your own device or go into a clinic a few times a week for treatments.

FUT – or both FUT and FUE – are generally reserved for people with very advanced hair loss. FUE, on the other hand, can be used for hairline restoration and less extensive hair loss procedures.

Male pattern baldness is a progressive form of hair loss that’s mainly caused by a mixture of genetic and hormonal factors. It has a strong hereditary component that accounts for about 80 percent of cases. But there are also a number of other factors that affect the development of this condition, including racial background, metabolic differences, diet, and sun exposure.

Fortunately, there are a number of FDA-approved treatments to stop androgenic alopecia from progressing to baldness. If you’re seeing mild to moderate hair loss symptoms, you can use minoxidil, finasteride, or laser hair therapy.

If you’re already balding, you can still use these treatments. But if you already have late-stage hair loss, you may also need to consider a surgical procedure, like a FUE or FUT hair transplant. The earlier you start using hair loss treatment, the better your chance of getting good hair regrowth results.