Is it possible to stop hair loss? 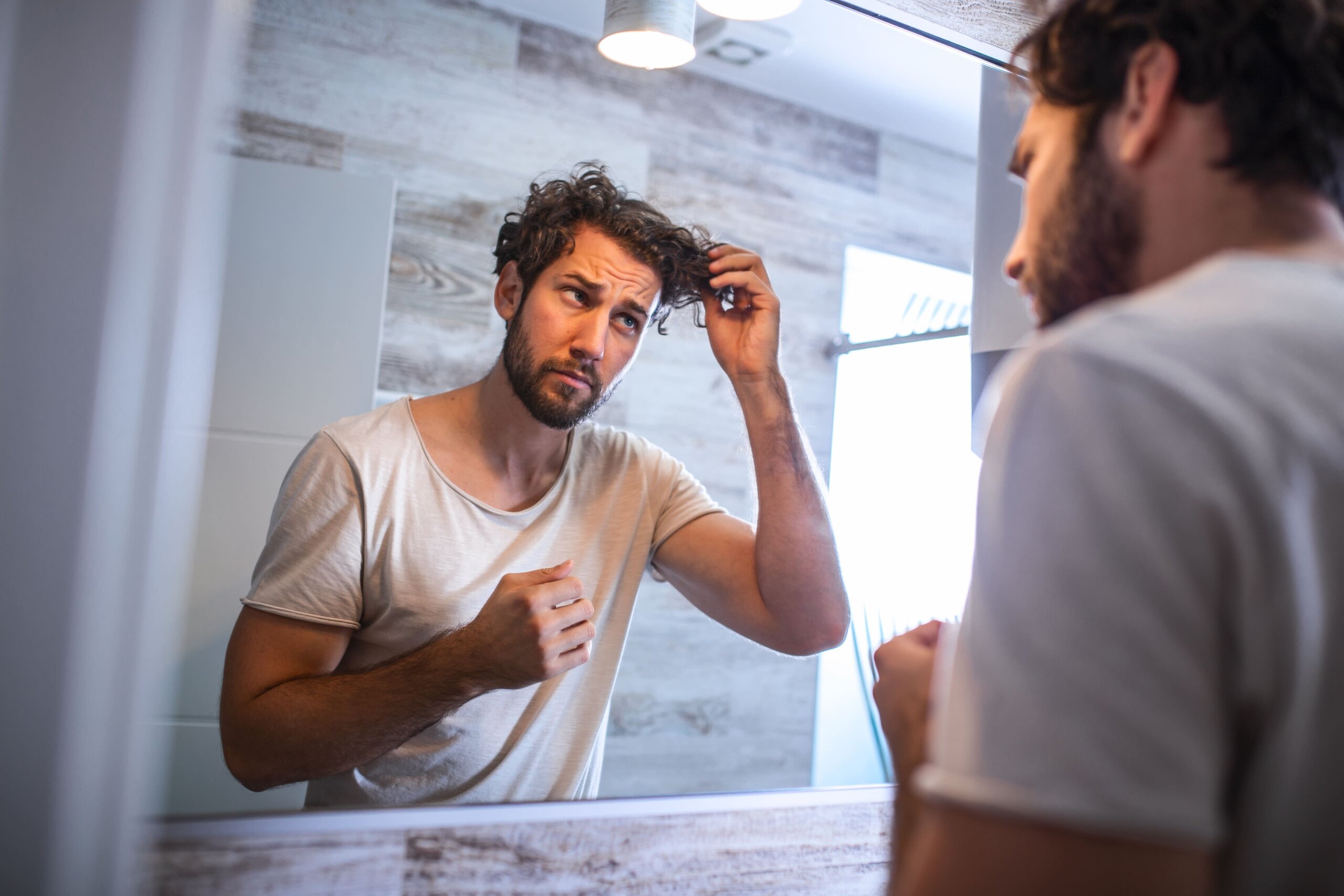 If you’ve noticed you’re losing hair, you’re not alone. Most men will experience hair loss at some point in their lives. In fact, according to the American Hair Loss Association, 85 percent of men have noticeably thinning hair by the time they turn 50. Unfortunately, a lot of people start going bald a lot earlier than that.

Hair loss can occur for a number of reasons. It’s most commonly caused by androgenic alopecia, which is commonly called male pattern hair loss or pattern baldness. This type of hair loss occurs due to a combination of genetic and hormonal factors.

If you’re experiencing symptoms of androgenic alopecia and want to stop hair fall immediately, the best thing to do is start a hair loss treatment. Minoxidil, finasteride, and low-level laser therapy are all FDA-approved options that can help stop hair loss and prevent balding.

How to tell if you have androgenic alopecia

Male pattern hair loss is a progressive condition that will lead to balding without treatment. But obviously, pattern hair loss won’t cause you to lose your hair overnight. This condition will only result in baldness after several years – or even decades.

What are the symptoms of pattern hair loss?

According to a study in the Journal of Cutaneous and Aesthetic Surgery, pattern hair loss generally tends to occur in defined stages. And this is a good thing! If you can identify symptoms early on, you have a better chance of preventing baldness. In fact, in some cases, you may be able to avoid hair loss altogether.

The first changes you’ll likely see are around your hairline. The hair follicles that frame your face are the first to be affected by miniaturization. You’ll start to see thinning hair around your hairline, particularly at your temples. Over time, you’ll feel like your forehead is getting bigger and see your hairline changing shape.

Temple hair loss continues to get worse as androgenic alopecia progresses. You’ll also find that hair in other places, like the crown of your head, starts to thin and weaken. At some point, the hairs around both your temples and crown will stop growing entirely.

If allowed to get to this stage, the rest of the hair at the top of your head will start to thin and will eventually stop growing, too. Once the majority of this hair stops growing back, you’ll essentially be bald.

It’s easiest to stop male pattern baldness if you start using a hair loss treatment early. If you’re just starting to see early-stage symptoms, like a receding hairline or thinning hair, there’s a very good chance you’ll be able to prevent further hair loss and stop balding from ever affecting you.

However, you should be aware that most hair loss treatments are designed to treat early to mid-stage hair loss. If you’re seeing extensive hair loss and thinning in places other than your temples and crown, you may already have late-stage hair loss.

Hair loss treatments can still help people with later-stage hair loss, but they may not be as effective. If hair loss has reached this point, you may need to consider a more extensive treatment, like a hair loss transplant.

How to prevent hair loss in men

The US Food and Drug Administration has approved three treatment options that can help stop hair loss in its tracks. These treatments are:

Minoxidil was the first medication to be approved as a treatment for hair loss. According to StatPearls Publishing, this topical drug has been around since the 1980s. It’s thought to work as a vasodilator, increasing blood flow to the scalp and hair follicles. It’s also able to stimulate the release of hair-related growth factors, regulate hormones, and lengthen the hair growth cycle.

Minoxidil is FDA-approved in concentrations of 2 and 5 percent. Both the liquid serum and foam typically need to be applied twice a day onto a clean scalp. Minoxidil 5 percent is thought to be most effective for men.

People who are new to using minoxidil can expect to see results in 2 to 4 months. Men who start using this treatment within the first 5 years of seeing hair loss symptoms are likely to see the best results.

Finasteride is an oral drug that’s meant to be taken once a day in 1-milligram doses. Unlike minoxidil, which can be used by men and women, this drug is only approved for use in men.

According to StatPearls Publishing, finasteride was approved as a hair loss treatment in 1998. This medication works by blocking DHT (dihydrotestosterone), the main hormone involved in androgenic alopecia.

As a DHT blocker, finasteride is able to help stop the miniaturization process. When people take this drug, it’s essentially helping prevent further hair loss as it can help stop hair follicles from shrinking and allow them to produce thicker, stronger hairs again.

However, finasteride doesn’t block DHT completely. It’s thought to reduce levels by about 70 percent. This means that it’s a great way to stop hair thinning, but it’s not a cure for baldness. The progression of androgenic alopecia will slow, but you won’t completely stop losing your hair.

Finasteride also has another downside. It has pretty unpleasant side effects that are unique to this hair loss treatment. StatPearls Publishing says that it’s been known to cause issues like:

LLLT is a light therapy that’s sometimes referred to as red light therapy or laser hair therapy. Unlike laser hair removal, the wavelength of light that LLLT uses actually helps people regrow hair. According to an article in the Dermatology Online Journal, LLLT was approved as a treatment for male pattern hair loss in 2007.

A study in the Lasers in Medical Science journal says that LLLT can help promote hair regrowth by stimulating dormant hair follicles. Like minoxidil, it can also increase the length of the hair growth cycle. LLLT is also thought to help reduce inflammation and may even be able to increase the number of hair follicles on your scalp.

LLLT devices are available in a wide array of shapes and sizes. You can buy your own laser cap, brush, headband, or comb to use at home or while on the go. Alternatively, you can book an appointment at a hair loss clinic and use bulkier devices, like laser helmets, or professional-grade devices, which have more lasers and can be expensive to purchase.

LLLT devices and treatments can be somewhat expensive, ranging from hundreds to thousands of dollars. But if time is money for you, they may still be a good option. A study in the Lasers in Medical Science journal reported that this hair loss treatment is most effective when used for less than 60 minutes per week.

Can you stop hair loss?

It’s totally possible to stop hair loss caused by androgenic alopecia. FDA-approved treatments like minoxidil are most effective in people experiencing early to mid-stage symptoms. This means that the sooner you start using a treatment, the more effective it’s likely to be.

Pattern baldness can be treated using minoxidil, finasteride, or LLLT. Minoxidil and LLLT work in similar ways, stimulating hair follicles and extending the length of the hair growth cycle. Both of these hair loss treatments are also somewhat time-intensive. Minoxidil needs to be applied twice a day and LLLT should be used for around 60 minutes per week.

However, finasteride, the convenient option that can be taken as a single pill, has the potential to cause unpleasant sexual side effects. Since all of these treatments need to be taken over the long term, minoxidil and LLLT are often considered to be better solutions to stop pattern baldness.